How NDA compares with UPA on government workforce

For a government whose stated calling card is “minimum government, maximum governance", for a government battling to create jobs, its own house paints another picture: in four years under this Bharatiya Janata Party-led National Democratic Alliance (NDA), the number of central government employees is projected to increase 7.2%. 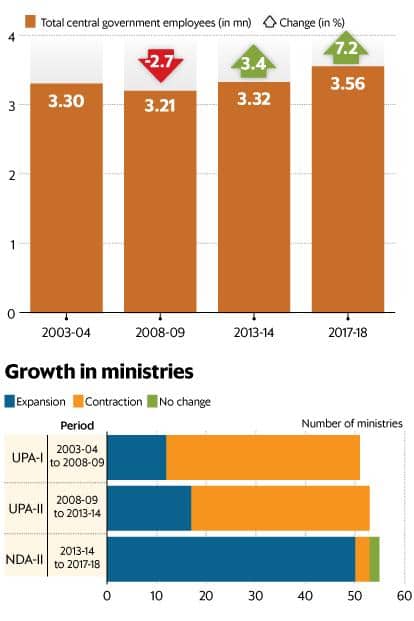 Just 20 of the 55 ministries account for 98% of the 2017-18 projected central government staff. Even among them, just four ministries account for 91% of staff: railways, home affairs (includes Delhi Police), communications (includes India Post) and finance. Under the previous two UPA governments, several of the top 20 ministries registered cuts. But under the present government, 19 have seen an increase in staff strength, the exception being health and family welfare. Where is the increase of government employees happening?

239,453: That’s the total addition to central government employees projected between 2013-14 and 2017-18. While about 70% of this addition is earmarked for three ministries—finance, home and defence—sizeable numbers are also being added in other ministries. In finance, the big increase is in direct taxes and indirect taxes departments, both of which are expected to double their counts. 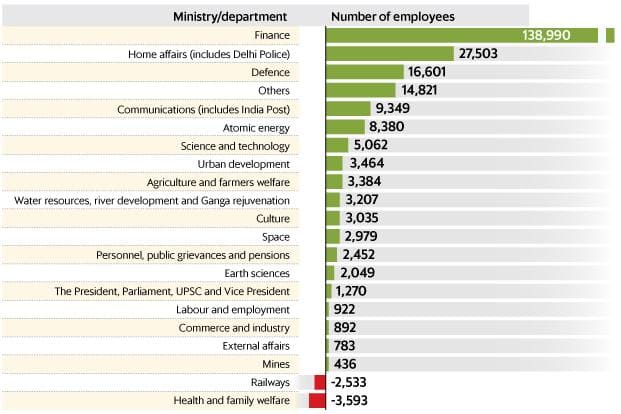 How are salaries increasing?

In 2017-18, the central government is projected to pay one-tenth of its budget in salaries to employees. In the last 14 years, a period that has seen the recommendations of two Pay Commissions being implemented, the total salary outgo has increased at a compounded annual rate of 14%. As a result, the median salary of ministries has increased more than four-fold. 2017-18 figures are projections for the year made by the government in February 2017; figures exclude defence forces personnel.

Howindialives.com is a database and search engine for public data.