New Delhi: A year after India recorded its sharpest jump of 30 places to 100th place in the 2018 World Bank’s ease of doing business rankings, government officials are worried that complex returns filing procedures and delays in refund of input tax credits under the goods and services tax (GST) regime may prove a drag on the country’s ranking, to be released in October.

“The survey for the next Doing Business ranking will start in February and will continue till May. Unless government takes quick corrective steps, GST may prove to be a dampener in the first (post-GST) year of the ranking though it will improve our ranking in subsequent years," a commerce and industry ministry official said, speaking on condition of anonymity.

Unless government takes quick corrective steps, GST may prove to be a dampener in the first (post-GST) year of the ranking though it will improve our ranking in subsequent years- A commerce and industry ministry official, requesting anonymity

The official added that reforms undertaken in other areas such as dealing with construction permits, starting a business and enforcing contracts could still improve India’s overall ranking. The National Democratic Alliance, which has been seeking an improvement in India’s ease of doing business ranking to attract greater foreign investments, has set ambitious targets for itself. According to an output-outcome framework document prepared by the government, India is looking to move to rank of 30 by 2020.

The Narendra Modi government introduced the GST regime on 1 July 2017 by subsuming dozens of state and central indirect taxes to transform India into a single market. However, complex filing procedures and delays in refund of input tax credits, especially for exporters, have drawn flak.

India’s rating may be hit in the “Paying Taxes" category of the Doing Business ranking, where it stands at 119th position, improving from 172 a year ago as it made payments of the Employees Provident Fund electronic and introduced a set of administrative measures easing compliance on corporate income tax. 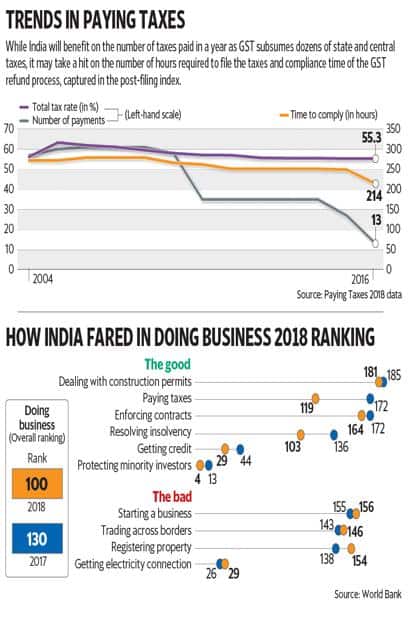 “Paying Taxes" measures payments, time, total tax and contribution rate for a medium-sized firm to comply with all tax regulations as well as post-filing processes. While the country will benefit on the number of taxes paid in a year as GST subsumes dozens of state and central taxes, it may take a hit on the number of hours required to file the taxes and compliance time of GST refund process, captured in the post-filing index.

The World Bank included the “post-filing index" criteria for the first time in its 2017 Doing Business report under the “Paying Taxes" head. This restricted India’s improvement in ranking to just one place—to 130 out of 190 countries—despite a slew of reforms undertaken by the government.

The post-ﬁling index is based on four components—time to comply with GST refund, time to obtain GST refund, time to comply with corporate income tax audit and time to complete a corporate income tax audit. The GST refund is an integral component of a modern indirect tax system. Some businesses incur more VAT on their purchases than they collect on their taxable sales in a given tax period and are, therefore, entitled to claim the difference from the tax authorities.

According to an output-outcome framework document prepared by the government, India is looking to move to rank of 30 by 2020

“The introduction of GST in India from 1 July 2017 is a landmark tax reform with significant implications for Indian companies’ tax compliance. The introduction comes too late to be reflected in the data for Paying Taxes 2018, but it will be interesting to see the impact it has in future, particularly on the time it takes to comply with consumption taxes in 2017 and on the GST elements of the post-filing index," Pratik Jain, partner and national leader-indirect tax, K. Sivarajan, partner, and Kartik Solanki director, PwC India wrote in a joint note in the World Bank’s special report on Paying Taxes 2018, released in November 2017.

Prior to the introduction of GST, India had a very complex indirect tax structure with multiple central and state levies such as excise duties on manufacture, taxes on inter-state and intra-state sale of goods, service tax on the provision of services, entry tax on imports into states, etc. These taxes were also administered by different authorities. Furthermore, tax rates on sales of goods and the exemptions were not uniform across states. All these taxes have now been subsumed into a GST levied on the “supply" of goods or services.