Mumbai/Hong Kong: The RBI is expected to keep its benchmark rate at a seven-year low this week amid slowing growth in Asia’s third-largest economy.

With inflation climbing fast toward the Reserve Bank of India’s medium term target, the Federal Reserve starting to shrink its balance sheet and growing speculation the government may loosen purse strings to bolster the economy, the room for lowering rates in the coming months is narrowing.

Nevertheless, the RBI is expected to paint a subdued picture of the economy and could downgrade its forecasts for gross value added — a key input of gross domestic product that strips out taxes and subsidies — for the rest of the year. That could prove to be bad news for India and might hurt inflows from foreign investors, who are already pulling out money from Indian assets. This has seen the rupee hit a six-month low last week.

A survey of economists conducted by Bloomberg News showed the RBI is expected to hold the repurchase rate at 6% until end-2017. A separate survey forecast India’s growth at 6.8% in 2018, down from 7.3% earlier.

For the third-quarter of 2017, India is expected to grow at 6.6%, year-on-year, down from a previous forecast of 6.9%, as it grapples with uncertainty caused by a newly introduced goods and services tax (GST), a banking system tackling bad loan problems and companies refusing to invest more as they try to lower debt taken during the boom years.

“We are in agreement with financial market and analyst expectations of a rate hold," said Shilan Shah, India economist at Capital Economics, Singapore. “Further ahead, some are still expecting further, albeit modest, policy loosening. However, with core price pressures building, we expect rates to stay on prolonged hold."

The RBI faces a juggling act over whether to bolster growth or retain its prime target of keeping inflation checked at 4% in the medium term. At the last meeting in August, it opted to cut interest rates to give an “urgent" boost to flagging investments. 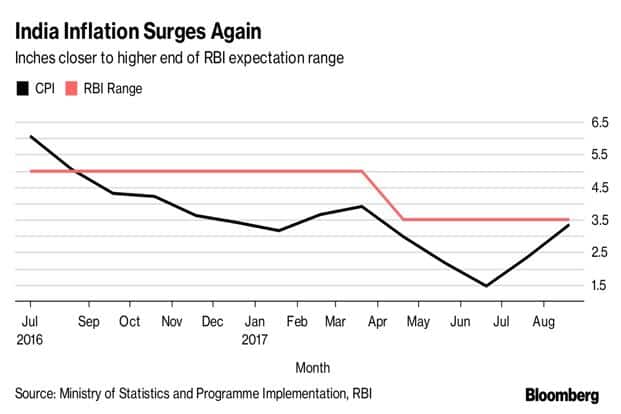 At the same time, governor Urjit Patel and his deputy Viral Acharya stressed the need for better monetary policy transmission, highlighting what many economists see as signals that the RBI was probably reaching the end of its rate-easing cycle.

“We will watch out for the evolution of domestic growth-inflation dynamics," said Madhavi Arora, an economist at Kotak Mahindra Bank Ltd. “If growth and inflation continue to surprise on the downside, RBI could cut an additional 25-50 basis points in the next six months. Our base case currently is for status quo for rest of FY2018."

While growth slowed to a three-year low in the April-June quarter from a year earlier, inflation in August accelerated to its fastest since March as food prices rebounded. Core prices, which strip inflation of volatile food and fuel items, also rose.

“We expect the RBI to leave policy rates unchanged, as momentum of core inflation has been much higher than expected and because the growth slowdown is due to non-monetary factors," said Sonal Varma, chief India economist at Nomura Holdings Inc. in Singapore.

India’s manufacturing sector grew in September on the back of an increase in new orders and output, a private survey showed on Tuesday. However, fresh export orders fell, unwelcome news for an economy where demand for goods from overseas markets had dragged down growth in the April-June quarter. The Nikkei India Purchasing Managers’ Index was at 51.2, unchanged from August, with a number above 50 indicating expansion.

Investors are waiting to see whether the government will spend more to boost the economy and if that would entail any fiscal slippage. Any extra spending could prove to be inflationary and might crimp room for the RBI to lower rates.

Speculation has been swirling about a stimulus to the economy that has been bogged down by an unprecedented cash ban and tax reforms. With elections a little more than a year away, pressure has been building on Prime Minister Narendra Modi to spur investment and create jobs for the swelling workforce.