New Delhi: Outgoing World Bank president Robert Zoellick on Friday batted for US candidates leading multilateral institutions such as the Washington-based organization he will be leaving in June when his term ends.

Zoellick, a former US trade representative, expressed his opinion a day after the five emerging economies under the BRICS (Brazil, Russia, India, China and South Africa) umbrella called for an open and merit-based process to select the heads of the International Monetary Fund (IMF) and the World Bank.

Interacting with reporters, Zoellick said it was important to have the US enhance its participation in the multilateral system. 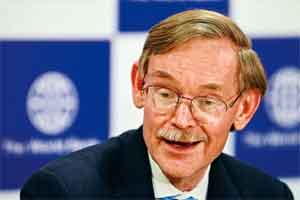 The US has proposed the name of South Korean-born American Jim Yong Kim for the position of World Bank chief to replace Zoellick. Some emerging economies have nominated Nigerian finance minister Ngozi Okonjo-Iweala and Colombian Jose Antonio Ocampo, director at the Economic and Political Development Concentration at the School of International and Public Affairs in Columbia University.

Zoellick, in effect, is saying that “we (US) should be pampered, otherwise we will not be siding with multilateralism", said Biswajit Dhar, director general of Delhi-based think tank Research and Information Systems for Developing Countries. “Because the US can see clear signs of change, they have to react to suggest that they cannot be cowed down."

Outgoing World Bank President Robert Zoellick talks about the proposed BRICS development bank and the importance of US leadership in international financial institutions.

On the development bank proposed by the BRICS countries, Zoellick said he knew from past experience that it is not easy to set up such an institution.

“People need to agree who are going to put up capital, they have to agree on governance structure, allocation and all these things. And if you want to borrow, you need to get a rating because the higher rating you get the cheaper you can borrow," he said.

Zoellick said he suspects that such institutions may become stronger on the financing side, while lacking the requisite knowledge and expertise. “We have the advantage of being global and operating in 120 countries. We would be able to share knowledge and then do joint financing (with the proposed development bank)," he added.

The World Bank would like to be a partner with the proposed bank like it partners with regional development banks, non-governmental organisations and civil society groups.

“I think India is one of the main sponsors of this idea because they want to get large money into infrastructure. I think it is a reasonable concern that people have," he added.

On the future of the Doha development round of World Trade Organization talks, Zoellick said: “There are ideas about sectoral reforms, sectoral liberalization; some of it may appeal to India because some of these might include service sectors."

On the recent controversy over poverty estimates in India, Zoellick said criticism of the methodology used to estimate the number of poor had been “overdone".

“Countries set individual poverty lines that are based on various calculations such as livelihood support, nutrition. What India has done is reduced the number of people in poverty and that is a good thing," he said. “Whether you live on a dollar a day, $1.25 a day or $2 a day, people will still struggle. So even if you are able to get people above the poverty line, people are still poor. So the challenge for India and for the World Bank as a partner is to try to create an upward ladder of opportunity. The good news is India has reduced the number of poor below its basic subsistence poverty line, but I certainly did not encounter any statement by the Indian government that they don’t want to increase the income of all Indians, particularly those below the poverty line."

On the proposal for a retrospective amendment to some tax laws that will enable the government to tax past transactions, Zoellick said he discussed the issue with the finance ministry “to try to understand this in relation to investment".

He said the sense that he got was that Indian authorities want companies to pay tax at least somewhere.