7 killed in US Sikh temple shooting

7 killed in US Sikh temple shooting

OAK CREEK, Wisconsin: A gunman attacked worshippers on Sunday at a suburban Sikh temple in the midwestern US, killing at least six people before he was himself shot dead by police.

The police commander at the scene in Oak Creek, near Milwaukee in Wisconsin, said he and federal agents were treating the mass shooting as a suspected act of “domestic terrorism," though the shooter’s motive was unclear. 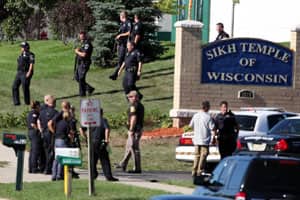 Oak Creek Police Chief John Edwards told reporters that officers had responded to a 911 call and raced to the temple, where one of them was “ambushed" and shot several times before a colleague took down the gunman.

The suspect died, as did six others who he had shot in and near the temple. Three men, including the wounded officer, were taken to a Milwaukee hospital, where a medic said they were in “critical condition".

Witnesses described a bloody scene of confusion and terror as the gunman strode into the temple and opened fire as people gathered for Sunday services.

Japal Singh, 29, spoke to several fellow parishioners about what happened and said that while people were still confused, some things were now clear.

A man who dropped his father off at the temple, known to Sikhs as a “gurudwara", said he saw the shooter—described as a tall white man with a bald head—kill two people in the parking lot.

“Then he went down inside the temple and then went into the room where the holy scripture is kept and basically shot more people there, multiple people there," said Singh, a combat medic in the US Army reserve.

Witnesses told Singh it was “a horrible place, a lot of blood and basically screams of everybody. Children, women, everybody. It was chaotic inside. People didn’t know what was going on".

Police did not name the shooter, although they had clearly identified him, as local and federal officers soon evacuated three blocks of housing in Cudahy, a suburb just north of Oak Creek, while they sealed off his home.

An AFP reporter in Cudahy saw heavily armed officers mounted in the basket on the ladder of a fire truck observing a house from above, while more police cordoned off the neighborhood as a precaution.

“We looked at it, the scope of it and what the implications might be. We are treating it as a domestic terrorist incident," Edwards said, adding that there was thought have been only one shooter and that the scene was secure.

Dozens of members of the Sikh community descended on the area after reports of the shooting and were held back behind a police cordon, anxiously scanning their cell phones for news of friends and relatives in the temple.

Factory worker Navreet Raman, 42, said: “It’s terrorizing. It’s our worship place. If church is not a safe place, what is? Nothing is safe."

Raman said it had been lucky that the shooting at taken place at 10:30am (1530 GMT)—in the morning—as the temple would later have been crowded with more than 300 people for afternoon services.

Obama said he and First Lady Michelle Obama had been “deeply saddened" to learn of the shooting, and Romney sent his condolences.

“As we mourn this loss which took place at a house of worship, we are reminded how much our country has been enriched by Sikhs, who are a part of our broader American family," Obama said, in a White House statement.

Police tactical units were on the scene, along with officers from multiple law enforcement agencies, including the Federal Bureau of Investigation.

The president of the temple, Satwant Kaleka, was shot and was taken to a hospital, according to The Milwaukee Journal Sentinel, which said the large place of worship had been founded in 1999.

There are reportedly between 500,000 and 700,000 Sikhs now living in the US. In the US, they have often been mistaken for Muslims and have been targeted by anti-Islam activists, particularly after the 11 September 2001 attacks.

Sapreet Kaur, executive director of the Sikh Coalition, which represents the community in the US, said police should be allowed to investigate but that he suspected a hate crime had taken place.

“There have been multiple hate crime shootings within the Sikh community in recent years and the natural impulse of our community is to unfortunately assume the same in this case," he said.

“Americans died today in a senseless act of violence, and Americans of all faiths should stand in unified support with their Sikh brothers and sisters."

Sunday’s shooting also bore some similarities to a March 2005 incident in nearby Brookfield, Wisconsin, that saw a gunman kill seven worshippers at a church service at a hotel, before turning the gun on himself.

Last month, a gunman burst into a movie theater showing the new Batman film in Aurora, a suburb of Denver, Colorado, and opened fire, killing 12 people and wounding dozens more.