Wholesale Price Index rose 0.34% in April after 17 consecutive months of deceleration, led by a sharp increase in food prices

New Delhi: Led by a spurt in food prices, inflation based on wholesale prices accelerated in April for the first time in 18 months, reinforcing the likelihood that the Reserve Bank of India (RBI) will hold interest rates steady next month.

The Wholesale Price Index (WPI) rose 0.34% last month, compared with -0.85% in March. The increase in WPI inflation follows a similar acceleration in retail inflation, which quickened to 5.39% in April from 4.83% in March.

Implicitly, the rise in both the inflation indices is a warning that food inflation worries are resurfacing. Food prices rose 4.23% in April, mainly on account of a sharp increase in prices of pulses and potatoes.

While prices of pulses rose 36%, potato prices also were up 35%.

Analysts point out that a surge in both the inflation measures virtually rules out a rate cut by the Reserve Bank of India in its next monetary policy review in June. 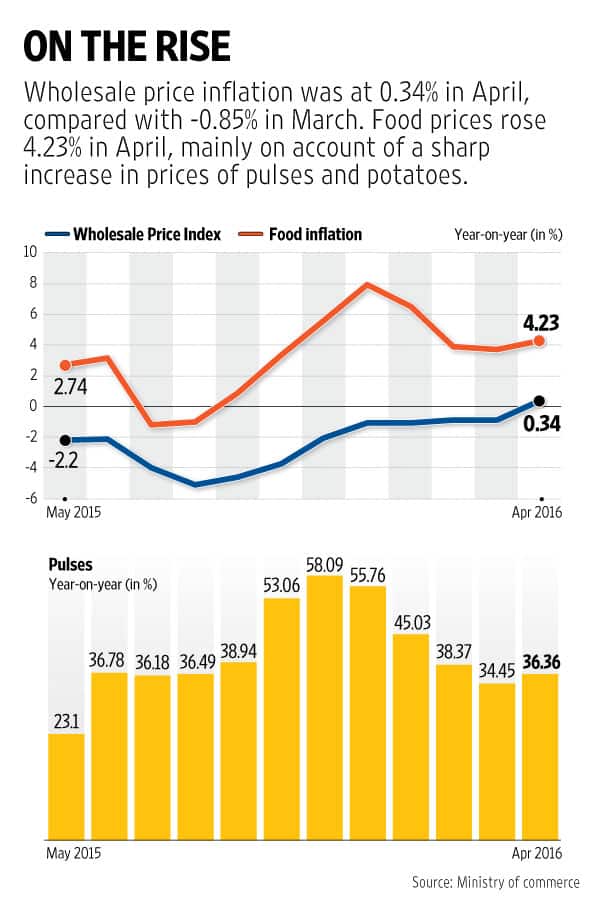 “Although pulses continue to be the sore point so far as food inflation is concerned, a spurt in potato and sugar prices in April 2016 from March/February 2016 shows that aberration in prices of select agricultural commodities due to supply shocks continues to have the potential to destabilise inflation and inflationary expectation in the India context and this makes managing food inflation a much more challenging job than hitherto believed," he said in a note.

A rate cut in RBI’s June policy review can be ruled out, he said.

RBI governor Raghuram Rajan cut the repurchase rate to 6.5% from 6.75% in April, taking to 1.5% the reduction in the benchmark rate since January 2014. He also promised easy liquidity conditions.

Consecutive droughts in 2014 and 2015 have hurt the production of pulses, a rain-fed crop. Pulses production was estimated at 17 million tonnes in 2015-16, unchanged from 2014-15, but lower than the 19.8 million tonnes produced in 2013-14, according to the third advance estimate released this month.

Analysts, however, consider even this production estimate to be over-optimistic, given that sowing of rabi (winter) pulses was down 7%.

Pulses are mostly grown as a rain-fed crop in India with only 16% of area under irrigation, compared with 93% of wheat area under irrigation. Nearly all major pulse-growing states in India such as Madhya Pradesh, Maharashtra, Rajasthan, Uttar Pradesh and Karnataka declared themselves drought-hit. India imported a record 5.8 million tonnes of pulses in 2015-16, nearly a quarter of the domestic demand estimated at 23.7 million tonnes.

A delay in the onset of the monsoon as forecast by the India Meteorological Department (IMD) will prolong the seasonal hardening in food prices, said Aditi Nayar, senior economist at Icra Ltd.

“Although a delayed onset does not necessarily signal a lagged progress of rainfall across the country, food prices are likely to ease only after a substantial area receives rainfall. The continued hardening of crude oil prices would also exert upward pressure on the WPI in the ongoing month," she said.

IMD on Sunday said the monsoon is expected to hit Kerala only on 7 June, six days later than normal. To be sure, there is no established link between the date of the onset of the monsoon and the intensity of rainfall in the country.

IMD has forecast that rainfall this year will be above normal.

“With the forecast of a delayed onset of the monsoon compounding the concern arising from the uptick in CPI and WPI inflation in April 2016, we expect the RBI would leave the policy rate unchanged in the upcoming policy review," added Nayar.

RBI is aiming to contain Consumer Price Index-based (CPI-based) inflation to around 5% in 2016-17, having made retail inflation the anchor of monetary policy.

In its first bi-monthly monetary policy review on 5 April, RBI said it will “continue to watch macroeconomic and financial developments in the months ahead with a view to responding with further policy action as space opens up".