Chandigarh: The Centre’s farm loan write-off scheme has evoked a lukewarm response in the states of Punjab and Haryana, because these two, the country’s food bowl, will get less than 5% of the Rs71,800 crore loan waiver and relief package.

According to the data released by various banks in Punjab and Haryana which are approved by the Reserve Bank of India (RBI), the loan waiver amount is Rs986 crore for Punjab and Rs2,108 crore for Haryana. 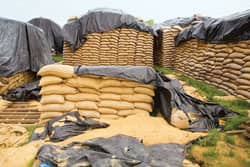 Wheat sacks in a yard on the Chandigarh-Ludhiana road. Though Punjab and Haryana produced 67% of the total wheat in India, their farmers will receive less than 5% of the waiver package (Photo by: Madhu Kapparath / Mint)

Punjab and Haryana contributed 67% of total wheat production to the national kitty this year.

That the farmers in two states serviced their debts on time is one reason why the loan waiver will not make much impact, either for them or the ruling Congress-led United Progressive Alliance, which expects to garner more votes in the general elections due next year thanks to the write-off scheme.

N.C. Jain, convenor, Punjab’s State Level Bankers Committee, a consortium of bankers, said: “Defaulters are low in Punjab and Haryana since the recovery of agricultural loans is very high."

Social stigma attached to being a defaulter has also prompted farmers to pay up on time. Also, agricultural economy is fairly efficient here.

In Punjab, farmers usually go for larger loans for purchasing farm machines, said a bank official on condition of anonymity.

He added that the unwritten law among banks is that tractor loans are not given to those who own less than 6 acres of land, which means whoever availed of such loans in the past decade are not part of the Centre’s waiver package.

The scheme is applicable only to farmers who owned 2ha hectares between 1997 and 2007.

The flip side, like elsewhere across the country, is that private moneylenders are estimated to provide nearly 50% of total farm loans in the state and they are not covered under the current waiver scheme.

With just 332,000 farmers as beneficiaries, the Punjab government was one of the first state governments to call the scheme “a fraud".

Punjab chief minister Parkash Singh Badal had said: “The entire scheme is a huge fraud. It is as a mere partial debt default readjustment scheme disguised as a loan waiver with an eye on general elections."