Election Metrics analyses in charts the impact Vidarbha farmers, and Mumbai and Pune can have in Maharashtra assembly elections

The Association for Democratic Reforms (ADR), in association with Daksh, a not-for-profit organization, has conducted a survey of over 20,000 respondents across all constituencies of Maharashtra, which elects a new legislative assembly on 15 October.

The survey collects demographic information of respondents, along with their ratings on the relative importance of various issues in the lead-up to the election. Respondents have also rated the performance of their sitting legislators on these issues in the past five years. This is in line with similar surveys done by ADR and Daksh in the lead-up to the Lok Sabha elections earlier this year, and other state elections prior to that.

What excites Election Metrics is that this data can be used to compare and contrast priorities accorded by voters belonging to different classes to different sets of issues. Every day, till the day of the Maharashtra elections, we will pick up two different groups of voters in the state, and understand the relative importance of different factors for them. The data for the following visualization comes from the ADR-Daksh survey, but has been normalized and scaled so that it is easily comparable. Each column represents the priorities given by the two groups (mentioned below) for different issues. The vertical distance between two issues in a column is representative of the relative preference for the group for one issue over another.

Farmers in Vidarbha and elsewhere 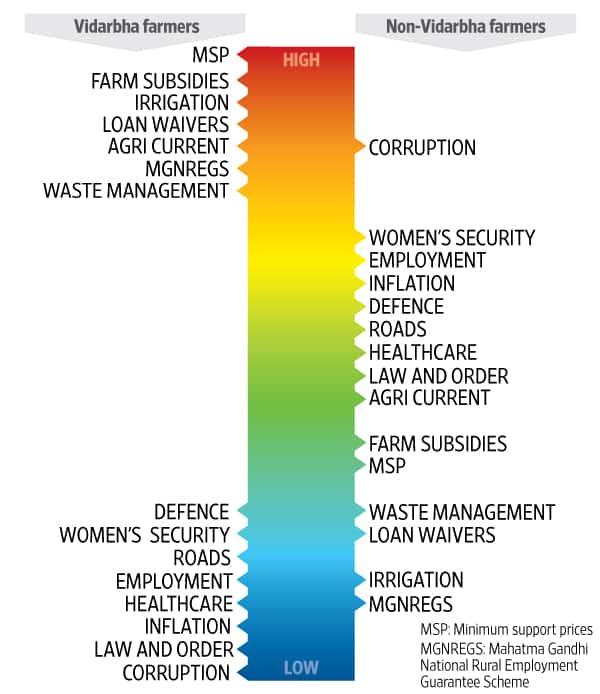 Data from the survey show that the difference is stark. Issues that matter to farmers in Vidarbha include farm subsidies, minimum support prices, loan waivers, Mahatma Gandhi National Rural Employment Guarantee Scheme, etc. These issues are close to the bottom of the pile for non-Vidarbha farmers. Issues important to non-Vidarbha farmers, on the other hand, are low down the priority scale for Vidarbha farmers.

Given such disparity in the priorities of farmers in two regions of the state, is it possible to formulate coherent policies which could address both? 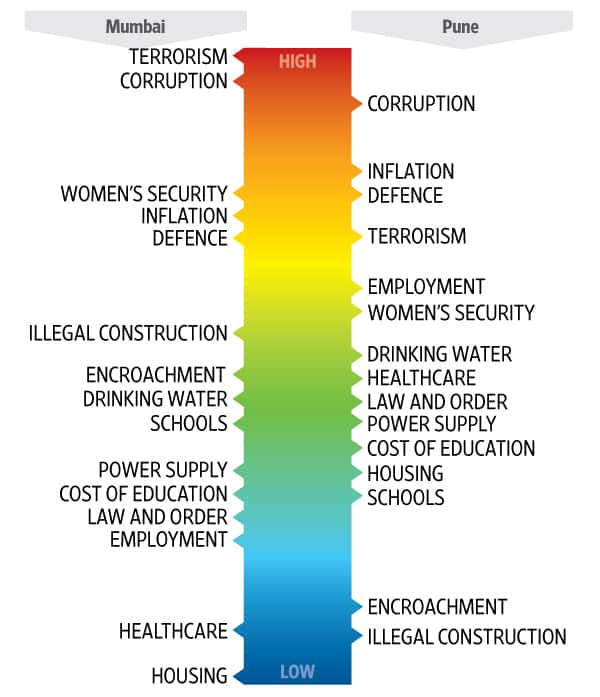 Maharashtra is home to Mumbai and Pune, two of the biggest cities in India. Situated within three hours’ drive of each other, people tend to see these two cities as a single unit, though they are culturally very different. Based on the ADR-Daksh data, we can examine if the priorities of the Mumbai voter are any different from that of the Pune voter.

The issues indeed look very different between the two cities. While issues such as corruption are high on the agenda for both cities, Mumbai seems to be concerned a lot more than Pune when it comes to terrorism (both cities have been victims of terrorist attacks in the last decade, but the scale and number of such attacks in Mumbai dwarf that of Pune). Punekars also seem much less concerned about encroachments and illegal construction, compared with their counterparts in land-starved Mumbai.