In its annual report on the pandemic, UNAIDS said the number of people dying of the disease fell to 1.8 million in 2010, down from a peak of 2.2 million in the mid-2000s.

UNAIDS director Michel Sidibe said the past 12 months had been a “game-changing year" in the global AIDS fight. 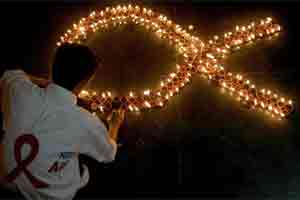 Much of that success has come in the past two years as the numbers of people getting treatment has increased rapidly.

“We’ve never had a year when there has been so much science, so much leadership and such results in one year," Sidibe said in a telephone interview from UNAIDS in Geneva.

“Even in this time of public finance crises and uncertainty about funding, we’re seeing results. We are seeing more countries than ever before (achieving) significant reductions in new infections and stabilizing their epidemics."

Since the beginning of the AIDS pandemic in the 1980s, more than 60 million people have been infected with the human immunodeficiency virus (HIV) that causes AIDS. HIV can be controlled for many years with cocktails of drugs, but there is as yet no cure.

Among the most dramatic changes was the leap in the number of people getting treatment with AIDS drugs when they need it.

Of the 14.2 million people eligible for treatment in low- and middle-income countries, around 6.6 million, or 47%, are now receiving it, UNAIDS said, and 11 poor- and mid-income countries now have universal access to HIV treatment, with coverage of 80% or more.

This compares with 36% of the 15 million people needing treatment in 2009 who got AIDS drugs.

“In just one year we have added 1.4 million people to treatment," said Adrian Lovett of the anti-poverty campaign group ONE. He said the figures showed “huge progress" but also underlined “the major push needed now in order to turn the corner in this epidemic".

Major producers of HIV drugs include Gilead, Bristol Myers Squibb, Merck, Pfizer and GlaxoSmithKline. Improved access to drugs from these and other manufacturers means not only that fewer people are dying of AIDS each year, UNAIDS said, but also that the risk of new HIV infections is reduced.

A series of scientific studies have shown that getting timely treatment to those with HIV can substantially cut the number of people who become newly infected with the virus.

Sidibe said this was starting to show in new case numbers.

“The big point for us is the number of new infections - that’s where you win against the epidemic," Sidibe said.

Medical charity Medecins Sans Frontieres (MSF) said the growing number of averted AIDS deaths was important progress. However, it added that the number of people on treatment needed to increase dramatically to reap the benefits of science.

“Never, in more than a decade of treating people living with HIV/AIDS, have we been at such a promising moment to really turn this epidemic around," said MSF’s Tido von Schoen-Angerer. “Governments in some of the hardest hit countries want to act on the science, seize this moment and reverse the AIDS epidemic. But this means nothing if there is no money to make it happen."

Despite progress on HIV treatment and prevention, sub-Saharan Africa is still by far the worst hit area, accounting for 68% of all those living with HIV in 2010 despite its population accounting for only 12% of the global total.

Around 70% of new HIV infections in 2010, and almost half of all AIDS-related deaths, were in sub-Saharan Africa.

Sidibe said that with many international donor countries struggling with slow economic growth and high debt, the global AIDS fight had to become even more focused on high impact interventions to deliver progress in the places worst hit.

“We need to maintain our investment, but ... in a smarter way. “Then we’ll see a serious decline in the epidemic," he said.