New Delhi: It’s a little past lunch on a May afternoon. Several young doctors in the making at this famed medical school—the All India Institute of Medical Sciences, or AIIMS—are ambling towards the teaching block. On their way to write the afternoon paper, no bit of the characteristic examination paranoia is visible. A handful of second-year MBBS students strolling by suddenly crackle with laughter; these folks are writing exams, too. But why is everybody so relaxed when the stereotype one has grown up with is medical schools, worldwide, are famous for their stressful curriculum and scorching pace? Medical students during a practical session at the department of anatomy at AIIMS, New Delhi (Photo by: Madhu Kapparath)

The students seem to be vindicated. Year after year, AIIMS has been ranked the top medical school in the country whatever the parameters surveyors use—factual data or perception, infrastructure or intellectual capital, training or research. Such is the reputation that even former AIIMS professionals, whether with a three-year training stint or 30-year teaching experience, cannot but help demonstrate a lingering nostalgia and pride in their association with the institution.

“When it comes to academics, AIIMS is indeed the best," says Arun Mohanty, a consultant cardiologist who joined Sir Ganga Ram Hospital in New Delhi in 2004. A native of Orissa, Mohanty came to AIIMS for DM, a three-and-a-half-year doctorate programme, also the highest degree that the institution awards. As a student, he recalls, he felt confident that he was getting the right guidance under the “vastly experienced" teachers, who even today have the “dedication to begin their day at 8am, without ever thinking about the money they earn".

“I’ve seen all disease types in the echo lab of AIIMS, which is a rarity elsewhere", he notes, emphasizing that the teeming patient pool at AIIMS, which, though famously drowns the doctors under workload, is a boon for students.

“No medical school can match the dedication of teachers at this institute, which is inbred in their genes," says Dr V.S. Mehta, director of neurosciences at Paras Hospitals in Gurgaon, Haryana. Having worked at AIIMS for 30 years, he left it in April 2006 when the clash between the Union health minister Anbumani Ramadoss and the then Institute director, P. Venugopal— which is another story for another time—started to affect his work. In leading the neurosciences division at Paras, Dr. Mehta is treating patients and earning a few times his old AIIMS salary, but he “misses the academic environment". 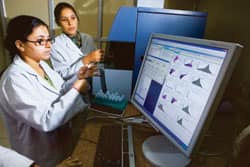 Medical students at a laboratory at AIIMS (Photo by: Madhu Kapparath)

In fact, there’s a separate division called Centre for Medical Education and Technology, or C-MET, which ensures new educational technologies are made available to the faculty and the students on time. It develops instructional courses for certification as well as new learning resource materials and innovates on how research can be used in medical education, which the institute produces in large amount—almost 1,400 papers are published in reputed journals every year.

C-MET also makes sure that students get problem-based learning. “We give them real- life situations," says Subrata Sinha, head, department of biochemistry. For instance, exposing students to a child from the slums who has sunken eyes and a history of diarrhoea, will not only teach them what are the effects of diarrhoea and dehydration but give them a lesson or two in socio-economic conditions of our society, says Dr Sinha.

Exposure to the vast patient population—more than 1.5 million outpatients in 2006-07—is the hallmark of learning here. “It’s a huge system with over 2,500 beds but our exposure to the cases is highly regulated and they are indeed discussed during the course," says Rakesh Verma, an army doctor currently under a hospital training programme at the Dr Rajendra Prasad Centre for Ophthalmic Sciences at AIIMS.

Weekly workshops, integrated seminars, journal clubs (where a student is expected to choose a recent journal paper and give a presentation), continued medical education or CME, case-oriented discussions, et al, contribute to the institutes’ curricula. “All departments develop CMEs, which are meant to train students, specialists as well as experts from other disciplines," says Dinda.

Even the cutting-edge medical technologies, which usually find a place first in private hospitals rather than in government medical schools, are available to students. For instance, in July 2005, AIIMS was the first government hospital to install the positron emission tomography (PET)—a non-invasive diagnostic tool. A year later, the institute became the first place in the country to start robotic urology surgery and installed da Vinci S4, a four-arm robotic system, the first such instrument in Asia which has so far performed more than 250 urological surgeries, setting some global records for AIIMS.

The charm here, says Dinda, is that a lot of improvisation in technology happens to suit Indian conditions. The cardiac transplant centre, which prides itself in conducting 26 heart transplants so far, has made innovations in the overall mechanization, sensors, informatics and other areas to make the procedures cost-effective and user-friendly.

Setting up of the bone bank for reconstructive surgeries, where bones from cadavers as well as brain dead donors are stored, is another such example of innovation. “To my knowledge, this is rare in any Indian medical institution," he adds. In all this, students, particularly motivated learners, benefit immensely.

“There is no compulsion to use the high-end machines—like foetal MRI, or magnetic resonance Imaging; PET scans; or electron microscopes—but if anyone wants to learn, there’s no restriction," says Suresh Ravichandran, an intern aspiring to go overseas for postgraduation later this year. It’s a pretty democratic set up here, he says, even in the examination system where questions are framed in a way that “examiners can make out who has more knowledge and intelligence".

The entire teaching system seems to be geared towards producing well-rounded medical professionals for the country. Of the 15 medical fellowships in the Kishore Vaigyanik Protsahana Yojana, a prestigious annual fellowship by the department of science and technology, seven were won by AIIMS students in 2007, says Dr. Sinha, who thinks the non-private-practice culture at the institute has enabled the faculty to try out innovative teaching methods. “The research atmosphere ensures that your thinking does not stagnate."

But the 52-year-old institution is at a critical turning point in its history. “Our students don’t want to join government hospitals, in fact they don’t even want to stay back at AIIMS," says N.P. Gupta, head of the department of urology and a robotic surgery expert. Private hospitals, though good for clinical care, will not benefit medical teaching in the country and that’s where most fresh medical professionals are flocking, is his worry.

He’s not alone in agonizing. Most of the faculty seriously debates the future of medical teaching in the country, especially at a time when the government has announced setting up six more AIIMS-like institutions. “We need not six but 60 more such places but where will you get the faculty from?" asks Aiimsonian Mehta.

It’s time for some introspection, believes Shakti Kumar Gupta, head, hospital administration and medical superintendent at the RP Centre. The excessive workload is diluting the mandate of the institute, which is primarily to be a medical teaching and research centre of high standard. “It is supposed to be a referral hospital but has been turned into a tertiary patient care centre," he says. Many people on the campus agree that though it is unethical to turn down patients—all those who manage to get admitted indeed receive the best of treatment—the severe patient load is breaking the back of the institution which could soon drive away good professionals.

The official hours of the OPD, or out patient department, are 2-6pm, but it often extends to 9pm, says Dr. Mohanty. He reminisces that most young doctors felt a lack of satisfaction for not devoting enough time to the patients. The institute is planning to establish a filtering OPD, which would allow it to retain its referral character, and though a proposal for this has been approved in principle by the government, it isn’t known when it’ll come into effect.

“The government has to decide soon whether it wants AIIMS to be a high-end medical centre or a primary health care giver," says B.K. Rao, chairman of the board of management at Sir Ganga Ram Hospital.

He thinks, like any hospital, AIIMS is clogged and if it has to maintain its lead then it must give more time to its people for intellectual pursuits. Educational innovations and experiments in medical schools are needed today more than ever.