Chandigarh, Lucknow, Delhi, Chennai and Bengaluru are found to be the five happiest cities in a study conducted by IMRB International

The study comes less than two months after the World Happiness Report 2015, published by the Sustainable Development Solution Network in April, showed India to be one of the unhappiest countries in the world. In the study, India ranked 117 among 158 countries in terms of happiness (2012-2014).

Countries like Bhutan, Iran, Pakistan and Italy ranked higher than India in the study that calculated rankings on the basis of six variables—GDP per capita, social support, healthy life expectancy, freedom to make life choices, generosity, and freedom from corruption.

IMRB conducted the study with a sample size of 2,424 respondents, aged between 18-45, across 16 cities. IMRB took passion, purpose, pleasure, pursuit and their contexts as key parameters for the study. Happiness has been found to be the most important value of life for Indians across the nation, compared to other sentiments like respect, trust, success or recognition, it stated. 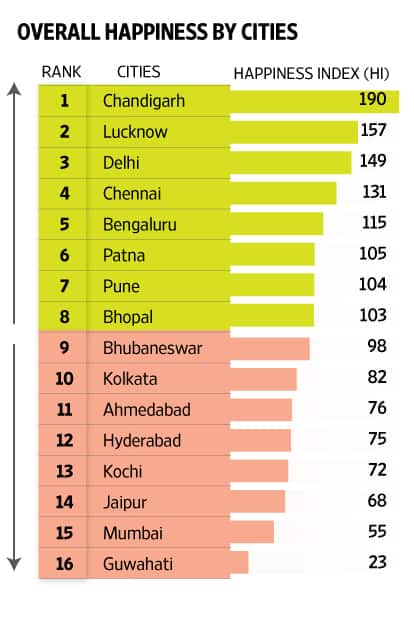 “While the importance of being happy is most for younger age groups, with 58% aged 18-24 ranking happiness as their most important core value, it is the older people aged 35-45, with a Happiness Index of 103, who are happier as compared to the younger people," the study said.

The LG Life’s Good Happiness Study was undertaken to understand the social construct of happiness, said Soon Kwon, managing director of LG India. The company is looking at undertaking this study annually. The study also noted Indians are generally happier on the ‘passion’ and ‘pleasure’ parameters as compared with ‘context’ and ‘pursuit’. Individually, people are happier in relation to family and personal relationships. The overall status of the country, things that enhance social status, and the state of social and cultural values come in as the bottom factors, the study revealed. People in the happiest cities are broadly happy with the amount of time they get to spend with family and the quality of the relationship they share with friends and family. They are also happy with the level of control over their lives, the study noted.

Interestingly, people in Bengaluru seem to be most in control of their lives and uniquely happy about their ability to fulfil all their needs and desires, the study added.