India moves up in ease of doing business rankings

India is ranked 130 among 189 countries, an improvement of four places from last year's ranking, according to World Bank's Doing Business Report 2016

New Delhi: In a pat on the back for the National Democratic Alliance (NDA) government, India moved up four spots in the global rankings for ease of doing business released by the World Bank on Tuesday.

The new rankings acknowledge the efforts undertaken by the Bharatiya Janata Party-led NDA to make it easier for entrepreneurs and companies to do business in the country.

“Fostering an environment more supportive of private sector activity will take time. But if the efforts are sustained over the next several years, they could lead to substantial benefits for Indian entrepreneurs—along with potential gains in economic growth and job creation," the World Bank said.

India ranked 130 among 189 countries, an improvement of four places from its last year’s ranking of 134, according to the Doing Business Report 2016. The report takes into account data till June 2015 and is based on a new methodology adopted for compiling the ranks both this year and last year.

India improved the most among South Asian countries, according to the Washington-based multilateral lender, and recorded the biggest increase in its score since 2004.

Referring to the NDA’s initiative to enhance the ease of doing business, the World Bank report said: “Spanning a range of areas measured by Doing Business, the program represents a great deal of effort to create a more business-friendly environment, particularly in Delhi and Mumbai."

This is the third improvement made by India in global rankings, said Manish Sabharwal, chairman of TeamLease Services, a human resource consulting company.

“The country has witnessed a nine-rank decline in Transparency International’s corruption index, 16-rank rise in the WEF’s (World Economic Forum’s) competitiveness index. You cannot beat this government on economic aspirations and such rankings are telling that only," Sabharwal added.

India ranked 85 among 175 countries on the Transparency International index released in December, down from 94 a year earlier. India jumped 16 places in WEF’s global competitiveness rankings, released in September, to 55 out of 140 countries, from 71 out of 144 last year. 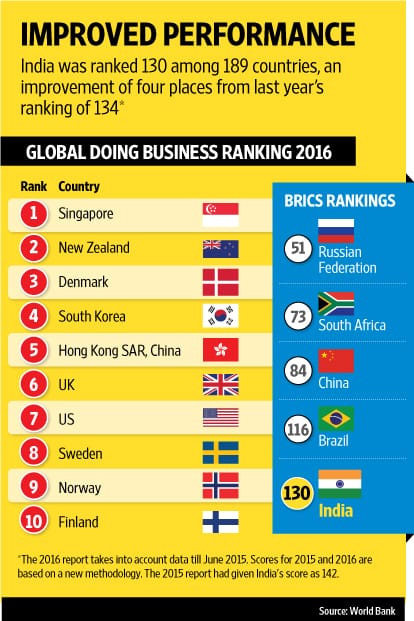 According to the World Bank, the improvement in India’s Doing Business ranking was due to the Indian government’s decision to amend the Companies Act to eliminate the minimum capital requirement of ₹ 1 lakh to start a local limited liability company. The report also cited the government’s decision to facilitate online systems for filing and paying taxes to simplify tax compliance as a positive step.

“Fostering an environment more supportive of private sector activity will take time. But if the efforts are sustained over the next several years, they could lead to substantial benefits for Indian entrepreneurs—along with potential gains in economic growth and job creation," the report said.

After taking charge in May last year, the NDA government under Prime Minister Narendra Modi has taken a number of steps to improve the business environment in the country. It aims to improve India’s ranking in the World Bank’s Doing Business rankings to under 50 in five years. From launching a single-window clearance system to making it easier for businesses to get approvals, to looking at ways to make the tax regime more predictable and stable, the government has looked at ways to encourage investors.

It has also unveiled several missions like Digital India, Make in India and Skill India to encourage more businesses to manufacture in India to generate employment. It is working to consolidate 44 labour laws into four to create a more enabling environment for industries. States like Rajasthan, Madhya Pradesh, Maharashtra and Gujarat have started labour law reforms to attract more investment and boost economic growth. Still, the government has failed to make any headway in putting in place a law to make it easier for businesses to acquire land, in the face of protests that it would undermine the interests of farmers. The government has now left it to state governments to follow their own land acquisition norms.

“We have to realize that events evolve to fulfil expectations and international rankings like these influence behaviour of a country and its people. Right now, I think the global perception of India is better than our own perception of the country," Sabharwal added.