Thanks for Visiting Mint
You seem to have an Ad Blocker on. Please turn it off in order to continue, or whitelist Mint
HOW TO TURN OFF AD BLOCKER
OR
REFRESH IF YOU ALREADY TURNED OFF THE AD BLOCKER
Home >Politics >News >Pilots may call off strike

Pilots may call off strike

Pilots may call off strike

Mumbai: The Indian Pilots’ Guild (IPG), which represents a section of national carrier Air India Ltd’s pilots, may call off a 57-day-old strike following the intervention of the Delhi high court, which advised an out-of-court settlement on Monday to end the impasse.

IPG had filed an appeal seeking the reinstatement of 101 pilots who were sacked after going on strike, and to initiate talks to end the stalemate. 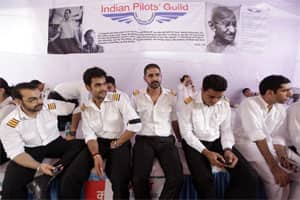 Pilots of Air India continue a hunger strike since 24 June in New Delhi on 3 July 2012. AP

Another IPG member said the Air India management agreed to look at “all the demands of the guild sympathetically" and the pilots were willing to give an affidavit to return to duty as instructed by the court.

“So, if that is the case, we may call off the strike and sort out the issues after discussing with the Central Labour Commissioner," another pilot said.

A senior Air India executive confirmed that the management had agreed to look at the demands raised by the guild, but said nothing has been finalised yet.