The electoral math behind the contest for 2019

With an anti-incumbency swing against the BJP, a Congress-led grand alliance of regional parties could rise to power in 2019 Lok Sabha elections

New Delhi: The Kairana bypoll results on Thursday show that a Congress-backed grand alliance of opposition parties has the potential to stop the Narendra Modi juggernaut in 2019 Lok Sabha. Whether or not that potential is realized will depend on how close-knit the grand alliance is, and the extent of the anti-incumbency swing against the Modi-led National Democratic Alliance (NDA) government.

A Mint analysis of the 2014 elections suggests that if all else remains the same, and the Congress and its potential partners are able to pool their votes, they will edge close to the Bharatiya Janata Party (BJP)-plus alliance but fall short of a few seats.

However, in a scenario with strong anti-incumbency, the Congress-plus alliance could gain a comfortable majority after the 2019 Lok Sabha elections. Thus, the ability of the Congress to pose a formidable challenge to the BJP will depend on its ability to stitch a cohesive alliance. If it is able to pull that off, it would be in a position to use its sizeable support base across the country to defeat the BJP. This would also allow the Congress to focus on winning in fewer seats, and help improve its votes-to-seats conversion ratio. 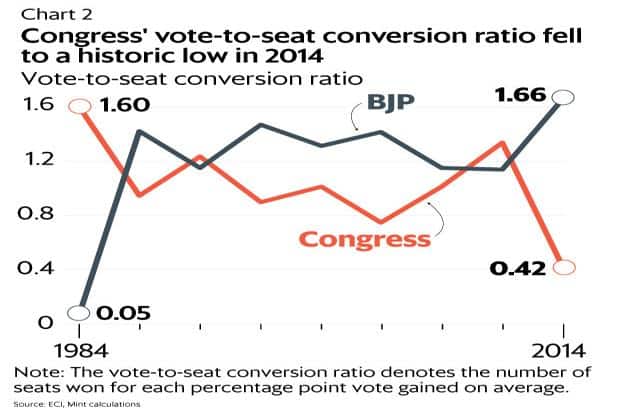 While the BJP has typically enjoyed a better conversion record compared to the Congress, even by the Congress party’s low standards, 2014 marked a rather drastic low, when it won only 8% of the seats despite winning nearly a fifth of the national vote share.

The BJP’s ability to defeat the Congress and its allies will hinge on its ability to win other allies, and its ability to broaden its appeal among different social groups. Data from the Lokniti-CSDS (Centre for the Study of Developing Societies) post-poll surveys suggest that the party’s success in 2014 owed as much to its core support base of upper caste voters as it did to gain among Dalits, Adivasis, and Other Backward Castes, or OBCs.

Dalits and Adivasis seem to be moving away from the party, according to the latest Mood of the Nation survey conducted by Lokniti-CSDS. Upper castes and lower OBC voters continue to back the party in large numbers. While the upper OBCs (Yadavs and Kurmis in Bihar and Uttar Pradesh, Vokkaligas in Karnataka, etc.) have political representation among regional parties, the lower OBCs (Badhais, Lohars, Kewats, etc.) lack such representation. The BJP has cashed in on this and, in a bid to woo such voters in greater numbers, has backed the sub-categorization of OBC reservations that could divide the OBC vote and benefit lower OBCs.

But such moves may not be enough for the BJP to repeat its performance in 2014. Attempts to consolidate all Hindu votes under the banner of Hindutva may also be subject to diminishing marginal returns, as the Kairana bypoll result demonstrates. The BJP will have to focus on the economy and revive economic sentiments to minimize the anti-incumbency votes.

In the final analysis, what is clear is the enlarged role regional parties are likely to play in the next Parliament. Non-Congress, non-BJP parties have consistently received about half of the votes in every election over the past three decades.