No land yet, but West Bengal asks Centre to keep nod for SEZ alive

No land yet, but West Bengal asks Centre to keep nod for SEZ alive

In a bid to keep its industrialization drive from getting derailed, the West Bengal government is keeping alive the in-principle clearance it got from the Union government for a chemical special economic zone (SEZ) planned in Nandigram, which had to be pulled from there after farmers protested the forced acquisition of land.

In a recent letter to the Centre, the state government has asked for the approval to be kept alive, even though it doesn’t have a land parcel earmarked as yet to set up the zone. An SEZ comes with specific tax incentives and other benfits that traditional industrial hubs may not enjoy and, consequently, attract more interest from businesses. 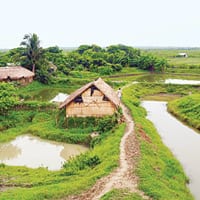 Nayachar, to where the proposed chemical hub will be shifted

This assurance was given at the all-party meeting held on 3 September, where it was decided to relocate the chemical hub to Nayachar, an island 3km off the coast of Haldia.

“We want to keep the in-principal approval alive for now," said Sabyasachi Sen, the state’s principal secretary for commerce and industry. He added that what is proposed at Nayachar will not be an SEZ but said that the government is not prepared to lose the few SEZs it has got cleared for the state, just yet. “We will try to find a new location for the SEZ, failing which the in-principle approval will be allowed to lapse," he said, reiterating the state’s plea to the Centre in the letter sent on Monday.

He, however, did not clarify which industry would be housed at the new SEZ, given that the chemical hub is moving to Nayachar.

Nayachar island has grown to its current size over the last 39 years, and its population of 450 is composed of recent settlers with no legal right on the land.

The political consensus that emerged on 3 September was clearly against land acquisition or the SEZ tag, even if this meant forcing a heavy project such as the chemical hub on an island which comes under the coastal regulation zone-I, where industrial projects are prohibited.

The government is now waiting for an environment impact assessment before the destination can be finalized.