New Delhi: Less than three months after trimming its India growth forecast, the International Monetary Fund (IMF) on Tuesday raised it by a tad, citing the resilience of its economy and robust growth momentum.

“India’s economy continued to recover strongly, benefiting from a large improvement in the terms of trade, effective policy actions, and stronger external buffers, which have helped boost sentiment," the IMF said in its World Economic Outlook (WEO).

In its WEO update in July, the IMF pared India’s gross domestic product (GDP) growth forecast to 7.4% from the 7.5% projected in April, citing sluggish recovery in private investment. 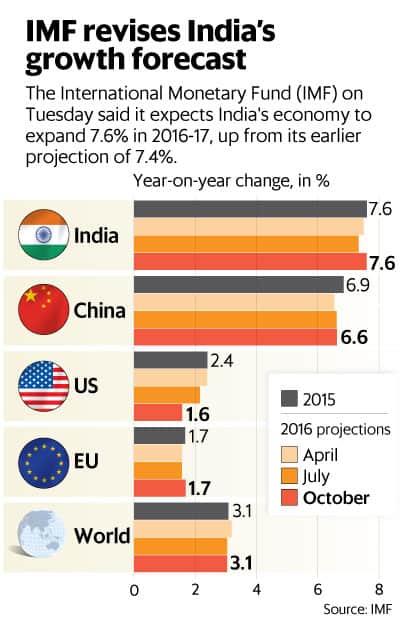 Rapid growth in countries such as China and India has sustained global growth, but a deep recession in a handful of emerging market and developing economies have implied a particularly strong drag on global economic activity over 2015 and 2016, the IMF said.

The multilateral agency kept its growth projections for China and the world unchanged at 6.6% and 3.1%, respectively, for 2016.

It signalled a hard-landing of the Chinese economy given its high dependence on credit that is growing at a “dangerous pace" to prop up growth and support unviable state-owned enterprises.

“By maintaining high near-term growth momentum in this manner, the economy faces a growing misallocation of resources and risks an eventual disruptive adjustment," it cautioned.

IMF said India’s economy has benefited from lower commodity prices, and inflation has declined more than expected. Yet, it cautioned that underlying inflationary pressures arising from bottlenecks in the food storage and distribution sector point to the need for further structural reforms to ensure that consumer price inflation remains within the target band over the medium term.

The multilateral lending agency said the Indian government had taken important policy actions toward the implementation of the goods and services tax, which will be positive for investment and growth.

“This tax reform and the elimination of poorly targeted subsidies are needed to widen the revenue base and expand the fiscal envelope to support investment in infrastructure, education, and health care," it added.

“Additional labour market reforms to reduce rigidities are essential for maximizing the employment potential of the demographic dividend and making growth more inclusive," it added.