Almost 1.8 million H1B visas have been distributed in fiscal years 2001 through 2015, according to a Pew Research Center analysis of government data

US President Donald Trump has ordered a comprehensive review of the H1B visa programme, the primary way that companies in the US hire high-skilled foreign workers. The multiagency review is expected to result in suggested changes to ensure that the most skilled and highest-paid applicants receive H1B visas.

Almost 1.8 million H1B visas have been distributed in fiscal years 2001 through 2015, according to a Pew Research Center analysis of government data. The programme allows employers to hire foreigners to work on a temporary basis in jobs that require highly specialized knowledge and a bachelor’s degree or higher.

Visas are awarded to employers on a first-come, first-served basis, with applications accepted each year beginning in April. If the number of applications exceeds an annual cap set by the US Congress during the first five business days of April, visas are awarded through a lottery system.

Since 2005, H1B visas have been capped at 65,000 a year, plus an additional 20,000 visas for foreigners with a graduate degree from a US academic institution. 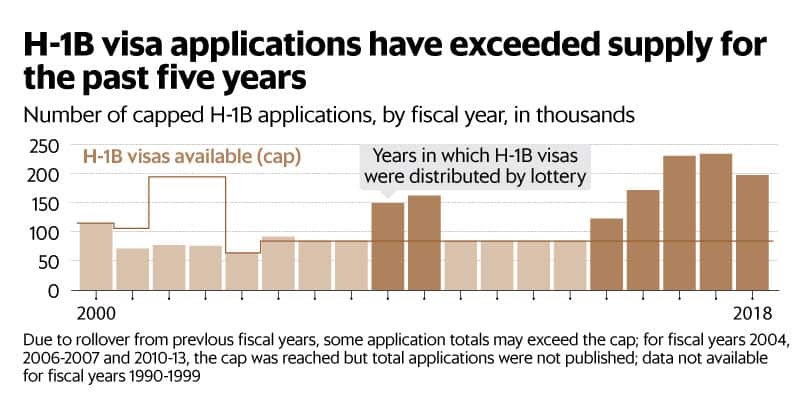 Universities and colleges, non-profits and government research institutions are exempted from the cap. These uncapped employers have accounted for about 10% of H-1B visa applications since fiscal 2010.

More than half of all H1B visas have been awarded to Indian nationals. From fiscal years 2001 to 2015, workers from India received the largest share (50.5%) of all H1B visas for first-time employment, while the second-largest share went to workers from China (9.7%). Other countries receiving a large share of visas during this time include Canada (3.8%), the Philippines (3.0%) and South Korea (2.8%). More than half of all H1B visa approvals in fiscal 2013 went to employers in four states. California (17.7%), New Jersey (14.0%), Texas (12.2%) and New York (7.2%) were the top states for H-1B visa approvals. These states have metro areas that are home to large technology and finance hubs such as San Jose, Dallas, Houston and New York City.

About two-thirds (64%) of H1B visa requests in fiscal 2011 were for occupations in the fields of science, technology, engineering and math (STEM). Nine-in-ten H-1B visa requests (90%) are for jobs that require some high-level STEM knowledge. 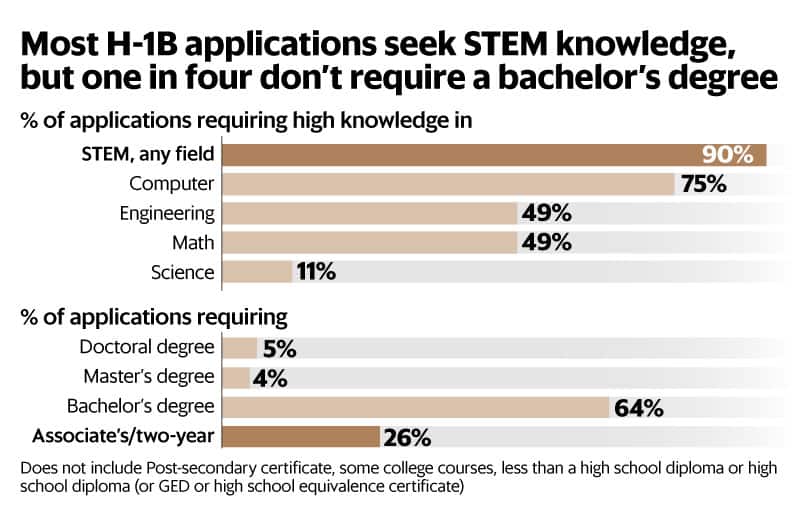