New Delhi: Recruiters estimate that on-campus job offers, which begin this week in business schools for those with job experience and continue in February for others, will be better than in 2009, but they do not see a return yet to the giddy times of the earlier years.

They are also gearing up for a spread-out process than earlier so they would have more time with the candidates. 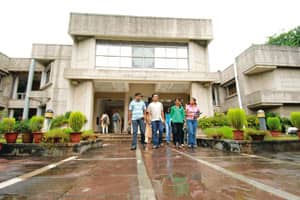 Reviving market: The campus of XLRI, Jamshedpur. The number of on-campus job offers at premier business schools is not expected to return to the levels of 2007 and 2008. Indranil Bhoumik / Mint

Misra will visit six campuses—the Indian Institutes of Management (IIMs) at Ahmedabad, Bangalore, Kolkata and Lucknow; the Indian School of Business (ISB) in Hyderabad; and the XLRI School of Business and Human Resources, Jamshedpur—to recruit 15-20 graduates for the group, with a mix of experienced hires and those seeking work for the first time. The Aditya Birla Group’s various businesses will hire around a hundred graduates.

These hiring numbers are roughly the same as last year, said Misra. He expects hiring to increase compared with 2009, but not reach the levels of 2007 and 2008. “Going up against what? Last year was very bad," said Misra.

Based on lessons learnt earlier, campuses and recruiters are preparing for saner hiring practices.

IIM Ahmedabad (IIM-A), for instance, said it will abolish the system of slotting recruiters into a couple of days and making candidates rush from one interview to the next. The premier school wants a more spread-out hiring season. So it will invite companies over weekends in cohorts or groups with similar job profiles on offer, beginning February.

An IIM Calcutta student, who deals with media queries, said her school is discussing with the IIMs in Ahmedabad and Bangalore not just the dates of final placements, but also changes in the process. IIMs in the three cities coordinate their hiring process to give recruiters time to travel.

“The day process led to great pressure on firms to make offers early and on students to accept offers on the spot," IIM-A said in a press release after a meeting with recruiters in Mumbai last month. “The cohort-based system will allow more time to the recruiters per student."

Recruiters tend to agree though they are waiting for more information on the new system and for it to be tested.

The biggest challenge the new process faces is whether the race to hire the top students will be slowed by spreading out the interviews. In the earlier system, investment banks and consultancies, invited on Day Zero, or the first day of recruitment, walked away with the so-called cream of the class.

“We are looking for not necessarily the topper," said Abhishek Malhotra, partner at Booz and Co., an international consulting firm with plans to hire at the IIMs in Ahmedabad and Bangalore, and at ISB. “(We want candidates with) demonstrated leadership abilities over and beyond what the campus requires."

Malhotra said he often asks candidates what they have done that cannot be reduced to a number.

Some recruiters say they are making their own rules to be less pushy.

The Mahindra Group, which includes India’s largest utility vehicles and tractor maker Mahindra and Mahindra Ltd, said it will not attach any clause to its pre-placement job offers (PPOs) for the first time. This will allow candidates who have got PPOs from the group to sit for interviews with other recruiters as well. Companies make PPOs to summer interns who have done impressive work.

“If at the end there is a company which is meeting their dream aspirations better than Mahindra, we have to let them go," said Allen Sequeira, executive vice president, group HR, who plans to hire 28 graduates from 16 campuses, including the IIMs, against 10 hired in 2009.

It is not immediately clear if the B-schools will allow such freedom.

Last year, as jobs dried up and campuses took a bad hit due to the Wall Street melt-down and conservative hiring by Indian companies, a few schools made it mandatory for graduates to accept PPOs and drop out of the placement process to make room for their peers.