Mumbai: In one of the livelier sessions at the World Economic Forum’s (WEF) India Economic Summit, panellists representing the media, government and the private sector debated how best to make the exciting but at times painful transition to a new media landscape.

“For us in the traditional media, the new public information space, whether it be Twitter or Facebook or whatever, is really holding our feet to the fire," said BBC news anchor Nik Gowing. 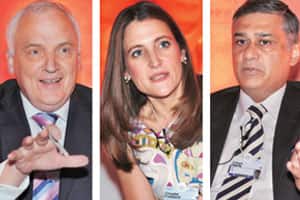 A fundamental challenge is faced by “those at the top (of media companies) who still believe that they will control the media space", Gowing said. “They can’t. (But) the mindsets are still stuck. By and large, a maximum of 5% at the top have even begun to conceive of the enormity of the change that is taking place."

Some panellists suggested that the dogged pursuit of news-cum-entertainment has gone beyond the bounds of journalistic ethics. That includes news about various corruption scandals.

“Because the electronic media in India is so new and a lot of the journalists in it are not really journalists, they’re just young kids who want to see their face on television, all the basic rules of journalism (are ignored)," said Tavleen Singh, a syndicated columnist and veteran journalist. This leads to what Singh called a “lynch mob mentality", in which suspects are assumed guilty until proven innocent. “What about the journalists who are inexperienced, who don’t know the impact of what they say? It’s uncontrollable," he said. “Look at some of our TV channels and the way they get somebody on his knees. There has to be a certain sense of ethical standards around what they do."

Financial Times India correspondent James Fontanella-Khan didn’t agree that youthful indiscretion was lowering the tone of journalism in the country.

“I feel like there has always been some sort of paternalism in India," he said. “You’re talking about the youth; I’m 28-years-old and a part of that generation. I don’t really want to be lectured by 70-year-olds who have been in cahoots with big corporate (entities). So yes, Indian journalism has a lot of young kids, like myself, who make mistakes, but that’s part of the game. And the guys who are in charge haven’t done a great job," said Fontanella,

Gowing said responsibility lies with the mainstream media to act as a filter.

“Those who are using their smartphones to take a photograph or whatever, they are not citizen-journalists," he said. “They are what I call bearers of witness. We are doing the journalism, they are providing data".

And, in addition to shining a light on corruption in government, the panellists said new media could play a role in exposing corruption in the ranks of the traditional media. The panel’s moderator, Chrystia Freeland, digital editor at Thomson Reuters, said, “Journalists love to report on the corruption of other people, but we are not immune to those charges ourselves."

Singh echoed these sentiments. She said she’s often “abused" on Twitter when she is critical of the popular anti-corruption movement by followers who say that journalists can be just as corrupt. She said she’s almost stopped tweeting about anti-corruption activist Anna Hazare “because they’ve almost intimidated me into silence on the subject".

The panel’s representative from the government, Navdeep Suri, joint secretary, public diplomacy, ministry of external affairs, likened the cozy relationship between some public relations firms and some journalists to those between lobbyists and politicians. “It got exposed and it’s made journalism look very ugly," he said.

Likewise, Financial Times’ Fontanella-Khan referred to companies paying for coverage and “the murky relationship" between some senior reporters who have been accused of acting as mediators between corporations and politicians.

Gowing said the responsibility lies with journalists, no matter what the platform.

“Good journalism remains about being suspicious of everything and everyone," rather than just regurgitating information from the Web, he said. “That is still a craft skill which has to be valued and promoted."