New Delhi: The government in 2009 allotted coal fields to two companies for projects meant to convert the mineral to liquid fuels, despite a Rajya Sabha member having expressed concerns the previous year to Prime Minister Manmohan Singh about such allocations being made without competitive bidding.

The government allotted blocks for coal-to-liquid (CTL) projects proposed by Jindal Synfuels Ltd (JSFL) and Strategic Energy Technology Systems Pvt. Ltd (SETSPL) based on the recommendations of an inter-ministerial group (IMG) led by Kirit S. Parikh, who was then member, energy, at the Planning Commission.

CTL involves converting coal into liquid fuels similar to petrol or diesel and each of these projects entailed an investment of at least $6 billion. JSFL is a unit of Jindal Steel and Power Ltd (JSPL) and SETSPL is a joint venture between a consortium of Tata group companies and South Africa-based Sasol Synfuels International.

“It is surprising that competitive bidding is not being used for allocation of captive coal blocks for CTL," Abani Roy, a Left parliamentarian at the time, had written to Singh in a letter dated 30 June 2008. “The allocation is being done on the basis of recommendations of IMG, which has totally subjective guidelines." 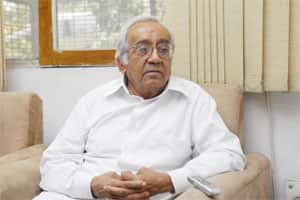 A file photo of Kirit Parikh who headed the inter-ministerial group. Photo: Mint

Naveen Jindal, chairman and managing director of JSPL, and a parliamentarian from the Congress party that leads the ruling United Progressive Alliance government, lobbied for allocation of three coal fields in Orissa to three applicants rather than assigning them to any one company by writing to Parikh. Mint has reviewed a copy of this letter.

JSFL was eventually allotted the Ramchandi Promotional block and Part North of Arkhapal-Srirampur field was awarded to SETSPL. The Palasbani block does not feature in the coal ministry’s list of coal block allocations.

Jindal couldn’t be contacted for comment. His aides said he was travelling and not immediately available for comment.

Both Ramchandi Promotional and Part North of Arkhapal-Srirampur fields were mentioned in a report released last month by Comptroller and Auditor General of India that pointed to alleged irregularities in the allocation of coal fields that the government auditor estimated led to notional losses of 1.86 trillion to the exchequer.

“With whatever information I got at that time, I asked the government to think over it. They did not pay heed to it," Roy said in a phone interview on Saturday. “That was in 2008 and now it is 2012, and look at what they are facing."

“There was no response to my letter from the prime minister," he added. “I did not write to anyone else. After all, I had written to the highest office, the prime minister himself. What was the point in writing to others about coal blocks?"

The Central Bureau of Investigation is now probing alleged irregularities in the allocation and utilization of coal fields by the allotees. The probe could compound the political problems of the government, which has been facing a series of corruption charges and controversies, including the allotment of telecom spectrum.

“It is not strictly true. It is not true that companies for executing coal-to-liquid projects were selected without competitive bidding," Parikh said in an emailed response. “Open bids were invited. A number of proposals were received and the group ranked them and the two companies were selected for executing coal-to-liquid projects."

The government invited applications for CTL projects based on criteria such as financial stability, mining experience and technical tie-ups and 28 companies applied, according to Ravi Muthreja, senior vice-president, corporate communications, JSPL.

“IMG conducted meetings for three days continuously on 29-30 September 2008, and 1 October 2008. After hearing all the companies and these capabilities to carry out ambitious capital-intensive projects, IMG recommended two companies, Tata’s and JSPL, in October 2008," Muthreja said by email.

JSPL was one of the most successful coal block allotees, winning seven fields.

The government took five months to reach a decision and then issued letters to the Tatas and JSPL on 27 February 2009, Muthreja said.

SETSPL was “amongst the 22 companies which responded and made presentations in late 2008 to an inter-ministerial group set up by the ministry of coal for allocating coal blocks for CTL among competing aspirants, based on which the final decisions were announced in early 2009", a company spokesperson said in an emailed response.

SETSPL’s South African partner Sasol Synfuels said “all due government procedures were followed and adhered to with the SETSPL procurement of the coal block".

“A transparent and competitive process was followed, as per the stipulations defined by the national authorities, and more than 20 companies applied for the two coal blocks, that were available for CTL projects in India," wrote Jacqui O’Sullivan, general manager of group communication at Sasol, in emailed response to questions. “An inter-ministerial committee was appointed to adjudicate and SETSPL was awarded one of the coal blocks."