A better way to manage knowledge

A better way to manage knowledge

We give a lot of talks and presentations about the ways and places companies and their employees learn the fastest. We call these learning environments creation spaces—places where individuals and teams interact and collaborate within a broader learning ecology so that performance accelerates.

During these discussions, it’s inevitable that somebody raises their hand. “Wait a minute," they say, “isn’t this just knowledge management all over again?"

It’s an understandable concern. Knowledge management (KM), after all, was probably the hottest topic in management in the 1990s. “If only our company knew what our company knows" was the mantra in those days. With knowledge becoming the most important factor of production, surely competitive success awaited those companies that could effectively manage what their employees knew.

But we all know by now that despite massive investments and a lot of highly motivated people knowledge management in some instances didn’t yield all the benefits it could have. The best KM systems succeeded at capturing and institutionalizing the knowledge of the firm. But for the most part the repositories and directories remained fragmentary and the resources didn’t get used. The folks with the knowledge were often reluctant to put what they knew into the database. The folks seeking the knowledge often had trouble finding what they needed. 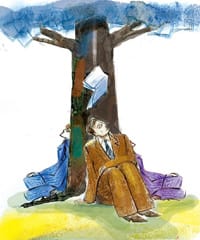 Most of us, as individuals, know this. That’s why we’re not keen to spend time entering our latest document into a knowledge management system. We know we’re better off engaging in the interactions and collaborations that create new knowledge about how to get things done.

In these circumstances, the last thing the world needs is another knowledge management scheme focusing on capturing knowledge that already exists.

What we need are new approaches to creating knowledge, ones that take advantage of the new digital infrastructure’s ability to lower the interaction costs among us all —ones that mobilize big, diverse groups of participants to innovate and create new value.

We’ve found in our research into environments like World of Warcraft (WoW) that new knowledge comes into being when people who share passions for a given endeavor interact and collaborate around difficult performance challenges. Most long-time gamers, for instance, figured it would be months before anybody made it all the way through the many difficult performance “levels" involved in The Burning Crusade, the World of Warcraft extension released in 2007.

But a French player named Gullerbone did so little more than 28 hours after the extension was released. His accomplishment made headlines in the gamer world.

Gullerbone succeeded by taking advantage of the tools and resources available to him (and his “guild" of teammates) in the vast creation space that has emerged within and around World of Warcraft. Creation spaces emerge from a careful recipe of participants, interactions, and environments blended by insightful designers. And they succeed where knowledge management fails.

Why? Because these creation spaces, heavily relying on shared network platforms, provide tools and forums for knowledge creation while at the same time capturing the discussion, analysis, and actions in ways that make it easier to share across a broader range of participants. Soon after Gullerbone and his guild figured out how to get through the new performance levels of the Burning Crusade, the details about how they did it soon became widely available in the social media “knowledge economy" surrounding the game—videos, blogs, wikis, etc.

This focus on knowledge creation shifts the motivations of participants. Knowledge management systems desperately try to persuade participants to invest time and effort to contribute existing knowledge with the vague and long-term promise that they themselves might eventually derive value from the contributions of others.

In contrast, creation spaces focus on providing immediate value to participants in terms of helping them tackle difficult performance challenges while at the same time reducing the effort required to capture and disseminate the knowledge created.

Creation spaces have the potential to generate increasing returns—the more participants that join, the faster new knowledge gets created and the more rapidly performance improves. They bring into play network effects in the generation of new knowledge. In contrast, traditional knowledge management systems are inherently diminishing returns propositions. Since existing knowledge is by definition limited, it requires more and more effort to squeeze the next increment of performance improvement as existing knowledge gets more broadly distributed.

Here’s another important contrast between creation spaces and conventional knowledge management systems. Knowledge management traditionally has focused on capturing knowledge that already exists within the firm— its systems rarely extend beyond the boundaries of the enterprise. Creation spaces instead focus on mobilizing and focusing participants across all institutional boundaries. Sure, there are lots of smart people within your enterprise, but imagine the power of connecting with and engaging a more diverse collection of smart people beyond your enterprise. That is another source of the increasing returns in creation spaces—participation is not limited by the boundaries of the enterprise.

What is your assessment of the limitations of traditional knowledge management systems? What are the major barriers that prevent them from delivering even more value to the firm? What issues need to be overcome to gain wider adoption of creation spaces as an alternative means of creating and capturing knowledge?