New Delhi: Anti-corruption campaigner Anna Hazare has said his next target will be electoral reforms. In an interview, chief election commissioner (CEC) S.Y. Quraishi stresses the need for Parliament to take up such reforms seriously and urgently. He also spoke about other areas of concern, including paid news, the criminalization of elections, and the commission’s limited powers. Edited excerpts:

Can state funding of elections address the problem of criminalization and money power in elections?

I personally and we collectively in the commission do not believe that is going to help, because it is not the money which is accounted for, but the black money we are fighting against... In fact, we feel that if there is state funding, the money that the candidate will save will probably go into the notorious envelope that would be slipped under the door... What is the guarantee that after state funding, all illegal and devious ways of spending money will disappear? But I think this suggestion about state funding is gaining ground increasingly and I am quite worried about it.

A major concern in the conduct of elections has been massive expenditures incurred by candidates, money power, and wrong furnishing of information to the commission. This is also a major source of corruption. Given the mood in the country today against corruption, what is the Election Commission (EC) proposing to do about it?

Our experience was first in Bihar, because that was the first election we had after we set up this division. We created new guidelines and we implemented it in the state and it worked very well. We saw the use of money power in the elections reduced. Enriched from this experience, we tightened our guidelines and went to polls in the next five states of Tamil Nadu, West Bengal, Assam, Kerala and Puducherry and about ₹ 73 crore of money we seized. Interestingly, candidates furnish wrong figures for no good reason. For instance, when we raised the limit from ₹ 10 lakh to ₹ 16 lakh (for each candidate in an assembly election), the average return filed with us has only been half of that. This means nobody has spent even ₹ 8 lakh. So they were talking about “rationalization" of ceiling but did not even avail of the full ceiling, so now “rationalization" would only mean bringing it down to ₹ 8 lakh!

This criminalization of elections, with candidates having criminal backgrounds contesting polls, has also been a concern. Has this declined?

No. In fact, figures tell us that the number of candidates with pending criminal cases has only been increasing. And it cuts across all party lines.

So what is the solution that you propose? 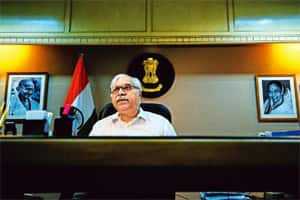 Is it a hindrance that the EC is just a quasi-judicial body with no definite authority in that sense?

It is adequate that we are a quasi-judicial body, because that is only in certain cases. But otherwise we are a regulatory body, an implementing body. When we conduct elections, we are an election management body. And we cannot be given judicial powers, powers to summon. That is not even what we are demanding. All we are saying is that Parliament has to take a call on this and the fact that people are very disgusted with the level of corruption, and leaders themselves have expressed concerns about these issues, but some concrete steps have to be taken. The only way is through Parliament, which is why we have been requesting the government to bring it to Parliament and build a consensus before it goes to the streets. Mind you, all agitations—led by Anna Hazare, Baba Ramdev—have said next on their agenda are electoral reforms. If the government allows this agenda also to be hijacked by somebody else, it will be very unfortunate.

Activist Anna Hazare and his team have been saying that they will next take up the issue of the right to recall elected representatives. What are your views on that?

Well, right to recall is a subject which is already pending with the constitutional bench of the Supreme Court for some time. If the government decides that through an Act of Parliament, they will introduce it—the Parliament is powerful enough to do so. But the basic purpose is an expression of people’s lack of faith in our representatives, which is why they say we need to recall. Our suggestion is that if the rest of the proposals, like for instance, debarring criminals from contesting in the first place, are put in place, then we won’t need it. My stand on Lokpal also from Day 1 has been that when we have a Parliament, Jantar Mantar cannot be a competitor. We cannot take national decisions on the streets. It is only that people are being forced to resort to the agitation approach. We had called an all-party meet two years ago and all of them dismissed our proposals and their logic is very simple. They say in politics, parties file false cases against each other. Our formulation is that a law should be brought that debars those criminals from contesting who have serious cases pending against them of heinous crimes which would lead to imprisonment of five years or more. To take care of politicians’ concerns that false cases will be filed, a safety clause has been provided that only in those cases should they be debarred where a court of law has framed charges. (Another) safety clause which we suggested was that these cases should have been filed six months before elections. But begin somewhere, otherwise do you want a repetition of what we are seeing these days?

Isn’t there an irony in politicians being the people who actually have to facilitate the formulations of these rules?

You said it. That is exactly the point. That is where the conflict of interest is. If we are asking for disqualification of certain people and debarring them from contesting elections and they are the guys who have to vote on this, obviously they will vote this out. These people will never pass such an Act. Then who will do it? Should people take to the streets? It is true that the people’s representatives represent the people, but then this sentiment of the people is not getting reflected.

So how do you break this deadlock?

We hope Parliament will initiate such reforms. The very fact that the government consulted all stakeholders in seven states shows there is interest. In the new atmosphere, where politicians, leaders, civil society, etc., are voicing concern about lack of people’s faith in public institutions, it is very dangerous that Parliament is weakened. Parliament is supreme, and its supremacy should never be questioned.

Another concern is paid news. You recently issued guidelines for news channels owned by political parties. Has anything concrete come out of it?

Indeed, we have seen incidents of paid news going down. We formulated our guidelines for the first time before the Bihar elections. In Bihar, about 100 notices were issued and whenever they were issued on time, the candidates immediately confessed and agreed to show it in their accounts. But we are still not fully satisfied with that bit. We feel it is not just a question of accounting, but is also a question of misleading the people. There is an element of deception that you are showing something that you have paid for as news. We are examining if some other legal action can also be taken. Secondly, we have issued new guidelines to address the new phenomenon of parties owning their own channels.

The biggest challenge for the EC in the last few years has been to deal with critics of electronic voting machines (EVMs). Do you think this is largely losers griping, and what was the result of the pilot election conducted by you to test the voter verifiable paper trail (VVPAT) system?

It is true that when the losers are looking for alibis, they start talking about it. But apart from the candidates, even independent members of civil society have been voicing concerns. We had called a meeting of all political parties, and apart from one or two, all said they don’t think the machines have distorted results or can be manipulated. All they are saying is there should be transparency, that they would like VVPAT. We referred the matter to the expert committee. In five states, we conducted simulated elections. The results are being compiled by the expert committee. Of course, it is something we are trying out for the first time, so there were some problems, there were some successes. But we leave it to the expert committee to come up with their considered opinion. At that time, the EC will decide what the next step should be, of course, in consultation with political parties. We want political parties on board for all deliberations; that is our new emphasis, you might say.

There is also growing the proliferation of “non-serious political parties". With so many fringe players, the electoral outcome often becomes tainted. Are you looking to address that?

The number of registered parties has now crossed the 1,200 mark, but we know not more than 140-50 are active. The others are redundant, dead or bogus in the first place. But unfortunately and surprisingly, we have no power to deregister. It is not that it has been denied to us deliberately. When this Act was passed and we were given powers to register, it was implied that we have the power to deregister. But this power was tested in the court and the Supreme Court said it has to be a specifically given power. So, this is also one of the reform proposals pending with the government... We feel these powers should be delegated to us instead of going to Parliament again and again and bothering it for small things.

A very crucial assembly election is coming up next year—Uttar Pradesh. Are there any special steps you are taking for that?

No special steps, because election is a very routine activity. However, different states have different problems. In states like Uttar Pradesh, there have traditionally been incidents of booth capturing, muscle power, and we need to deal with that. So there are local variations, but 95% of the election system is the same everywhere.

The EC, in the past few years and particularly since assembly elections in 2008, is perceived as being more proactive and cracking the whip harder. Has this been a deliberate strategy?

I do not see that there has been any cut-off line since when we suddenly decided to become proactive. The EC has been increasingly proactive since 1995 or so, Mr T.N. Seshan’s days. And each commissioner has made it stronger than before. It is also a question of individual preferences, individual styles of working. There are some initiatives we have taken recently, in the last one year. For instance, cutting down heavily on money was one of my first initiatives. We set up an expenditure monitoring division. Then we also wanted to focus on voter education, and for that we created another division. Thirdly, we found there is a lot of international interest in India’s EC, and we have a great standing worldwide, so the time has come when we should start sharing our experiences with those aspiring democracies that want to strengthen the roots of democracy—the basic objective being to have good elections with zero tolerance, which are free, fair and peaceful.