New Delhi: In a corner of the desolate Sarai Kale Khan bus terminus, two white vans are parked on a mid-morning mission. The first van, onto which the words “Mobile Court" have been freshly stencilled in red paint, contains a stenographer and a magistrate. The second van holds a group of beggars, assorted policemen and harried probation officer Jojie John.

John’s Hindi is an even match for the mumbled Punjabi of a white-bearded beggar named Bhajan Singh, dressed in a shirt and dhoti that are nearly black with dirt. “Which dak khana (post office) zone do you come from?" John asks for the third time. Singh still doesn’t seem to understand the question.

“How far have you studied?" John asks, but this question too is lost on his subject. So John finishes up his report, written in neat longhand, and then tells a constable: “Take him to the magistrate."

Launched in early September, ostensibly to improve the city’s image ahead of the 2010 Commonwealth Games, these mobile courts rotate through sections of New Delhi, conducting summary trials on the batches of beggars brought in by their raid squads. The original plan had called for 11 such courts; at present, only two are in operation. “Some days we get two beggars, some days 10," M.K. Gupta, one of the two magistrates deputed to the mobile courts, says. Then he clams up and adds: “I’m not supposed to discuss the court’s workings." 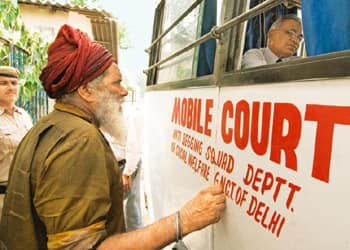 Bhajan Singh waits his turn outside the mobile court at the Sarai Kale Khan bus terminus.

The mobile courts operate under the strictures of the Bombay Prevention of Begging Act, which was passed in 1959 in Mumbai and extended to 18 states including Delhi, and which criminalizes begging. In February 2007, a Delhi high court bench further instructed the city’s government to clear the streets of beggars and to send them to one of 12 beggars’ homes.

But as S.A. Awaradi, director of the department of social welfare in the Delhi government, acknowledges, the courts can only function as long as their trial procedures are legal. “A public interest litigation (PIL) has been filed in the Delhi high court, raising the legality of the law," Awaradi says. “We’re only implementing the (2007) instructions of the bench as per the law as it is today." If the PIL is heard favourably, the mobile courts may have to return to their garages. 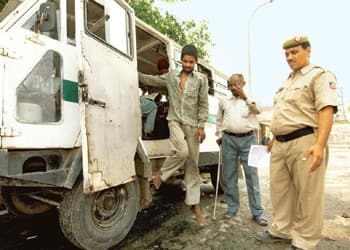 Harsh Mander, one of the litigants in the PIL and for long a crusader for the urban homeless, has heard that argument before. “They always cite these ‘mafias of begging’ as an answer, but there’s very little evidence that the overwhelming majority of these beggars are part of any mafia," Mander says. “The whole notion that begging is a crime that has to be dealt with—I find that a completely unacceptable premise." The beggars’ homes, Mander adds, are “worse than jails, with conditions that are completely subhuman".

Of the 28 people he has processed in his van over the last month, John confirms he has met no “professional" beggars, no members of begging cartels. “They’ve all just been poor people who have somehow come into the city," he says. “Of these, we’ve sent 17 to the beggars’ homes and we’ve let the others go with a warning." A group of beggars rounded up during a raid in the vicintiy of the bus terminus wait for their trial to begin.

“Should we send you to a nice place? Where you’ll get food and a place to rest?" Gupta asks. Singh doesn’t understand, but even before he can offer an opinion, the magistrate delivers his verdict: “Send him to one of the institutions, for one year."

Singh arrived in Delhi a month ago, exactly when the mobile courts swung into action. He had tried looking for work, he says after his trial. “But I didn’t find any, so I started begging," he says. Does he know where the magistrate is sending him now, a bystander asks him. He doesn’t, Singh admits. “You’re going to a place where they’ll keep you for a year and where they’ll feed you." Singh’s expression, which hasn’t changed since this process began, continues to remain absolutely impassive, as if the words have not registered at all.