GDP growth will fall to 7.4% from 7.6% in 15-16; tepid external demand is offsetting pickup in domestic demand

The Economic Survey pegged the economy’s growth at 7-7.75% in 2016-17, indicating a greater chance of deceleration from the previous year’s GDP estimate of 7.6%.

The slowdown in advanced economies, including US, lower commodity prices and weaker currencies in some major trading partners, vis-à-vis the Indian rupee, are likely to hit merchandise exports and financial, telecom, business and other tradable services.

ADB projected growth to pick up to 7.8% in 2017-18, “helped by the government’s strengthening of public sector banks’ capital and operations, private investment benefiting from corporate deleveraging, the financing of stalled projects, and an uptick in bank credit".

ADB chief economist Shang-Jin Wei said India will remain the fastest growing large economy in the world in the near term. “The potential growth of the country can be raised further if it can successfully implement necessary reforms including unifying the tax regime, improving the labour market regulations, as well as opening up further to foreign direct investment and trade," Wei said. 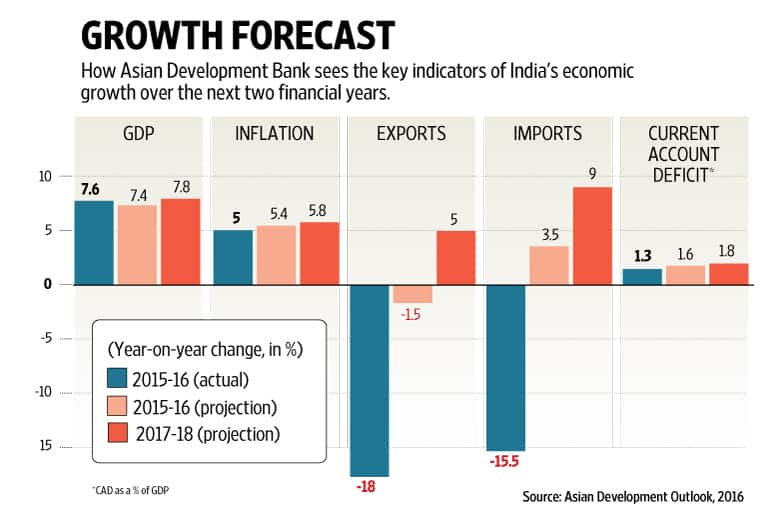 Asia’s two giant developing economies, India and China, are heading in opposite directions, with China—in the midst of a structural shift towards more sustainable growth—slowing down while India is set to pick up, ADB said. ADB has projected China’s economic growth to slow to 6.5% and 6.3% in 2016-17 and 2017-18, respectively, against 6.9% in 2015-16.

ADB said public investment will continue to be an important driver of growth, as the government is expected to use savings from oil to further boost government investment. “However, the finances available to ramp up investment in FY17 will be considerably smaller than in FY16, given the sharper pace of fiscal tightening and increased outgo on account of a higher public sector wage bill," it added.

Private consumption growth is estimated to have picked up to 7.6% in 2015-16 from 6.2% a year earlier. However, ADB said these estimates are likely to be optimistic, as achieving them would require private consumption to grow at 11.7% in the fourth quarter of 2015-16, nearly double the 6.1% growth rate achieved in the first three quarters.

“Much of the improvement in private consumption stems from a pick-up in urban consumption, while rural consumption has remained subdued as a result of two consecutive weak monsoons," the report added.

After two years of decline, ADB is projecting consumer inflation to accelerate to an average of 5.4% in 2016-17 and 5.8% in 2017-18 as global oil prices firm up and domestic demand strengthens.

ADB said the Reserve Bank of India has signalled an accommodative monetary stance, though further cuts to key policy rates would be contingent on the evolving inflation trajectory and implementation of planned budget consolidation. “Thus, while aggressive rate cuts are unlikely, 2016-17 may see some monetary easing," ADB said.

However, the multilateral agency said with new guidelines from the central bank requiring banks to set their lending rates based on marginal cost of funds, or rates offered to new deposits, there will be greater transmission of reduced policy rates to lending rates.

“The consequent reduction in the cost of borrowing is likely to boost aggregate demand," the ADB report added.