Kalahandi, Orissa: In October, the villagers of Miyangpadar, part of the Yougsai Patna gram panchayat, finished building a road linking their village to the main road 6km away; part of the assets created under the Mahatma Gandhi National Rural Employment Guarantee Act (MGNREGA) scheme. They’re yet to get paid. Little to show: (clockwise from top) Inhabitants of Gadari village in Kalahandi district stock up on maize, which becomes their staple diet in the lean season. Despite extreme poverty, people here are yet to find work under MGNREGA; a group of 60-odd villagers dig a pond under the scheme in Pandakamal village, one of the few villages in the district where the Act is being implemented; and a villager in Rakeshtunda village, which still has no electricity—the people here complain of prolonged delays in wage payments for work done under MGNREGA. Indranil Bhoumik / Mint

The story plays out across the villages of Kalahandi, a shameful symbol of India’s hunger and poverty. There are few bank branches here, local government bodies are ineffective and there is no mechanism to spread awareness about the programme. The figures tell a sorry tale.

Only 43% of the Rs50.76 crore allocated in the fiscal year that ended March has been utilized, against the national average of 71% for the 619 districts where the scheme has been implemented. Almost none (0.3%) of the tasks undertaken have been completed. Miyangpadar is lucky—at least it got a road out of the programme, which has failed to create assets in the rest of Kalahandi, let alone provide wages.

Of the 1.2 million rural population of Kalahandi, only 78,000 got jobs under the programme last fiscal. Although a little over 600,000 were registered, less than 300,000 were issued job cards and women constituted 38% of the workforce.

The programme seems to have failed in its role as an effective security net for the poor.

“There is no awareness about the scheme and people do not know the process for demanding jobs. The panchayats are non-responsive and do no planning," said Sanjiv Joshi, secretary of Jan Kalyan, a not-for-profit group that works in the area, adding that the delay in wages is the greatest drawback. “The government allocates enough funds for spreading awareness about the scheme but most of it goes unutilized. MGNREGA has made no difference to the lives of the rural poor here."

The villagers of Miyangpadar have begun to turn away from MGNREGA. “I didn’t get any money, so now, even though there is some road construction happening in the nearby village, I prefer to stick to mahua collection, even though that fetches me less money," said Padmini Naik. The villagers earn Rs1,000-2,000 by collecting forest products such as mahua every month.

In Rakeshtunda village of Sagada panchayat in Bhawanipatna block, people have a familiar complaint. They worked on a road, and haven’t been paid. The sarpanch took away their post-office account passbooks and withdrawal slips with their thumb impressions.

“We all worked on the road but didn’t get any money... We are very poor... The sarpanch took away our passbooks and we do not know what is happening," said 35-year-old Suka Dei.

The village head, meanwhile, is clueless about the scope of the scheme.

“I don’t know what work we’re planning under the scheme... Don’t know what work has already happened," said Anupama Naik, the sarpanch in Sagada panchayat, while refusing to comment on allegations that she took away the passbooks.

The district administration, meanwhile, blames lack of financial infrastructure for the delay in wages, the main difficulty in implementing the scheme.

“Earlier, workers were paid in cash but that was susceptible to corruption," said R.S. Gopalan, Kalahandi district collector. “Now, payments are made through banks and post offices, and in Kalahandi their penetration is very poor. Hence, the main problem is the delay in wage payments, sometimes even up to nine months."

In Gadari village, inhabited by 20 below poverty line (BPL) tribal families, most villagers never got any work under the programme. The gram panchayat has not planned a single project under the scheme since it was launched in Kalahandi in 2006. Even a couple of villagers who have done some MGNREGA work had to travel to other villages to do so.

“We were given job cards but the gram panchayat took it away and never gave it back," said Kanga Majhi, a resident of the village.

Naturally, villagers prefer working in the fields for lower wages.

“Though we earn only Rs50 per day, we get our payments every day and can even take an advance. In MGNREGA, there is no guarantee of when we would get paid," said Janabi Majhi, one of about 15 women from Ghantamal village working in a local field.

The district administration blames the low participation on the lack of initiative among villagers. 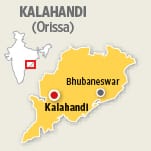 Apart from the red tape, activists say the state government’s scheme of giving up to 25kg rice at Rs2 per kg to BPL card holders has also acted as a disincentive.

“Also, they prefer taking up other jobs instead of wasting time first demanding work under the scheme, then waiting for payments and making several rounds to the panchayat and banks for wages," said Joshi.

The programme’s success hinges on factors such as political will and effective delivery mechanisms, not just spending money.

“Even in states like Andhra Pradesh and Rajasthan, where the scheme has done well, it has been mainly because of political will, which ensures effective management and availability of infrastructure," said Yamini Aiyar, senior research fellow and director of the accountability initiative, Centre for Policy Research. “There is no doubt that political will is the real anchor to ensure that the infrastructure required for the scheme is in place so that the money being pumped in actually reaches the poor. In Orissa, and particularly Kalahandi, the government has not done very much to address this and no effort has been made to build capacity at the panchayat level."

This is the last of a five-part MGNREGA status report.