Bangalore: Running against a stream of mounting evidence that Himalayan glaciers, like others elsewhere in the world, are melting due to global warming, a report in the 10 August issue of Current Science journal has said that the Siachen glacier has not been affected by the rise in global temperatures. 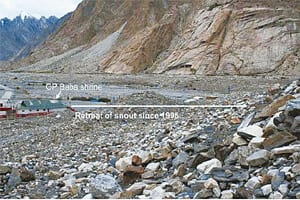 Based on field studies in the summer of 2008, authors M.N. Koul and R.K. Ganjoo of the Regional Centre for Field Operations and Research on Himalayan glaciology at the University of Jammu, said: “Overwhelming field geo-morphological evidences suggest poor response of the Siachen glacier to global warming."

It’s annual weather variations and not global warming that are causing the melting of the Siachen glacier in north-western Himalayas, they said.

According to this study, the snout, or the lowest end of the glacier, has retreated by about 8-10m since 1995, amounting to an average retreat of 0.6m a year. On the east side, the Siachen glacier shows fast withdrawal of the snout, which is essentially due to ice calving—the sudden release and breaking away of a mass of ice from a glacier—and is true for almost all major glaciers in the Himalayas and happens irrespective of global warming. On the west, the glacier has reduced due to the melting water coming from a retreated tributary glacier.

“The Siachen glacier shows hardly any retreat in its middle part and thus defies the hype," the authors wrote. Their claim is in response to a study published earlier this year by researchers of the Kumaun University in Nainital, Uttarakhand, which said that there is geological evidence to show that the Siachen glacier has retreated by almost half in the past few decades due to global warming.

Seasoned glaciologists, however, don’t concur with the latest findings.

“Ganjoo’s observation is suspect as another study in the north-western Himalayas by some Defence Research and Development Organization scientists have shown that the temperature is rising," said D.P. Dobhal, a glaciologist at the Wadia Institute of Himalayan Geology in Dehradun, who studies two Himalayan glaciers, including the Dokrianai glacier.

Dobhal doubted the findings of this study as he thinks Ganjoo hasn’t “studied the region long enough" and one seasonal field study is not sufficient to make “such overarching claims". “You need long-term data to come to any conclusion," he said.

Another glaciologist, Sayed Iqbal Hasnain at The Energy and Research Institute in New Delhi, who has set up a weather station in Kashmir to study the Kolahoi glacier, rubbished Ganjoo’s study because it lacks “scientific data".

“The snout of a glacier is not the right metric to study the change. The mass of the glacier, which changes due to the (ice) accumulation, needs to be studied, ideally via satellite and optical sensors," he said.

India has never undertaken any systematic study of any glacier, hence, has no benchmark glacier till date for long-term studies, said Hasnain.

But under environment minister Jairam Ramesh, a white paper on the Himalayan glaciers has been prepared, which Hasnain is reviewing.