The Nikkei India Manufacturing PMI reported a 52.1 reading in September from 52.6 in August indicating that growth lost some momentum

India’s factory activity expanded for the ninth straight month in September, helped by new orders and surge in buying levels. However, the rate of expansion was slower than in August and there is an intensification of inflationary pressures, showed a survey.

These new numbers will be additional fodder for the new monetary policy committee as it sits to meet for the first time to review interest rates.

The Nikkei India Manufacturing Purchasing Managers’s Indices (PMI) reported a 52.1 reading in September from 52.6 in August indicating that growth lost some momentum. A reading above 50 indicates expansion and below 50 contraction. 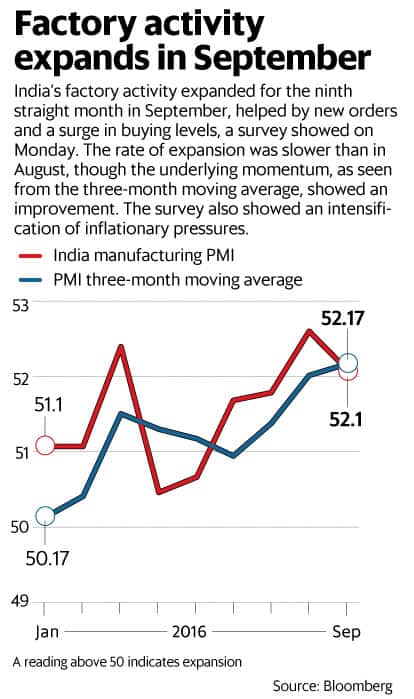 One key reason was the softer increase in new business inflows, said the survey. While new improved client demand supported the upswing in order books, growth was hampered by strong competition for new work, said the study.

Another bright spot was the increase in foreign orders which expanded at the quickest rate in 14 months. While companies scaled up their buying levels and hired additional workers, the pace has flagged compared to previous months.

However, average purchase costs increased at a faster pace in September, but were still slower when compared to the long-run trend. That was because manufacturers attempted to protect profit margins as output charges were raised further.

Still, the rate of inflation is muted compared to historical trends.

“Although inflation rates edged higher, these remain weak by historical standards and indicate that we may still see the RBI loosening monetary policy in 2016," said Pollyanna De Lima, economist at IHS Markit and author of the PMI report.

Economists in a Mint poll published on Monday remained divided on whether the RBI would cut the repo rate by 25 basis points to 6.25% in the 4 October policy.

Retail inflation has decelerated to 5.05% in August and a good monsoon and sharp decline in food prices have opened up room for monetary easing.

However, there are risks too in the form of FCNR (foreign currency non-resident) deposit outflows and liquidity tightness owing to telecom spectrum payouts and increased food credit due to bumper crops which might make the RBI pause, said some economists polled by Mint.