NCRB data reveals crimes against women and foreigners, cases of sedition have decreased while human trafficking, cyber crimes have increased

The National Crime Records Bureau’s report was released by the home ministry on Tuesday. Overall, incidents of crime in 2015 increased by only 3.4% over 2014 to 7.3 million. With the usual caveats about the quality of reporting, the NCRB data provides a window into the kinds of crimes being committed in the country and the larger law and order situation. The data reveals that crimes against women and foreigners, environmental offences and cases of sedition have decreased while cases related to human trafficking and cyber crimes have witnessed an increase. Crime in India’s 53 cities with a population in excess of a million saw a nearly 10% jump to 676,086.

Here are some key highlights from the 2015 report:

Overall, the number of crimes against women decreased from 337,922 in 2014 to 327,394 in 2015. Still, the increase in instances of attempts to rape, sexual harassment and kidnapping is worrying. The north eastern states were the safest for women

States in the North East saw the least number of rapes, perhaps an indicator of the extent to which women are empowered in some of these societies. Not too many cases against human trafficking are filed. Still, the sharp increase (on a low base) shows that this is a problem that is rearing its ugly head. India attracted around 8 million foreign tourists in 2015, up from around 7.5 million the previous year. The number of crimes against foreigners (a classification that could, apart from tourists, also include expatriates who have made India their home) actually fell in 2015. 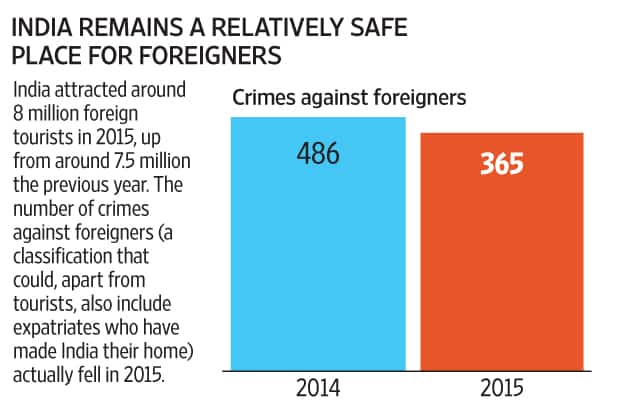 In recent months, India has been roiled by instances of crimes against Dalits and other underprivileged, so much so that the issue has even been discussed in Parliament. However, the number of crimes against people belonging to the scheduled castes (SCs) and scheduled tribes (STs) declined in 2015. 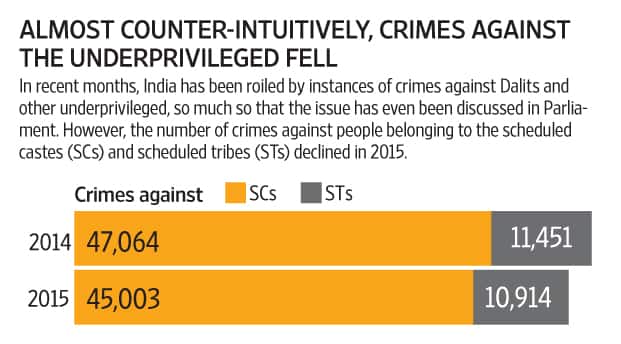 The digital revolution is making its presence felt

Due to increasing awareness, the preparedness of law enforcement agencies around the country to record and tackle cyber crime, as well as the growing sophistication of cyber criminals (and the increase in digital transactions), the number of reported cyber crimes in 2015 was higher than that in 2014.