Why women continue in abusive relationships

New Delhi: The figures for India’s most widespread crime against women make for a harrowing story—yet, it’s only half the story.

This despite the fact that a law against domestic violence has been on the statute books for a decade. And activists fear that these figures could just be the tip of the iceberg as many more cases go unreported because of the low position of women in India’s patriarchal society. 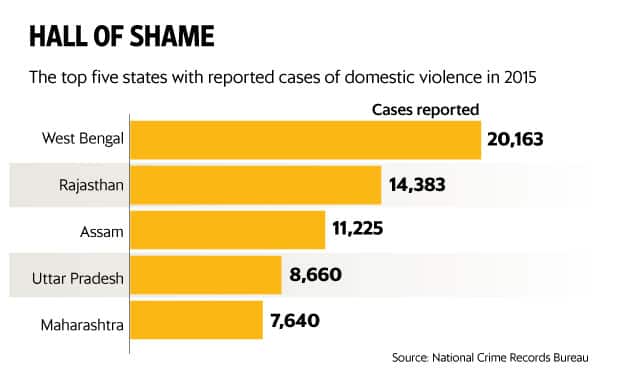 “Many women go for out-of-court settlements, while others continue suffering because they are either not aware of this provision or their families keep them from reporting it," says Rajat Kalsan, a lawyer and activist with the Human Rights Law Network.

Ten years after the landmark Protection of Women from Domestic Violence Act (PWDVA) was passed, more and more people want to know why the Indian woman continues to face violence at the hands of her husband and his relatives.

Why does domestic violence continue?

The law, in effect since October 2006, provided women relief in the form of protection orders (civil injunctive orders to stop and prevent acts of domestic violence), residence orders (to prevent the woman’s illegal dispossession and protect her right to the shared household), monetary relief (maintenance as well as reimbursement of expenses), orders granting temporary custody of children and compensation orders.

However, the ordeal of a 39-year-old Delhi municipal worker tells a different story.

The beatings started within months of her marriage in 1997 with their frequency and severity increasing with time. The beatings have left their marks on her ankles and elbows, yet it took the woman, who declined to be identified, nearly 16 years of humiliation before she filed a case against her husband.

“He would beat me if I denied him sex or if I couldn’t make our kids stop crying or if he didn’t like the food I cooked. He would profusely apologize later, so I would forgive him. My father passed away when I was a little child and my mother died in 2003. I have only studied till Class IX and had three children to take care of. So, I decided to stay in the marriage," she says.

Her husband left her in 2008 and she started living in a single room in her brother’s house.

With a meagre salary of Rs5,000 as a worker in the civil department of New Delhi Municipal Corporation, where she helps in road construction and maintenance, and erratic earnings from singing at kirtans, she has managed to put her children through school and get a one-room rented apartment in south Delhi’s Dakshinpuri locality.

ALSO READ | A day in the life of a Mahila Panchayat

What triggered her to finally break her silence and approach the courts?

“I came to know that after throwing me out, my husband had started living with another woman. I had been struggling to make both ends meet, all because of him, and here he was, unaffected. I went and approached the mahila panchayat in our area, who told me about the law," she says.

It has been three years since she filed a case in 2013, demanding maintenance from her husband under the PWDVA. However, 12 court hearings have passed without giving her the relief she wants.

“Either the judge is on leave or my husband doesn’t show up for hearings. It takes Rs100 to just reach the court, but I still go there every time, hoping today will be the day. In the end, I just note the next date of hearing and come back," she says. Her next court hearing is on 8 November.

Kamlesh Premi, a counsellor who has been working with the Centre for Social Research, a non-governmental organization dealing with women’s issues, said, “We need to look beyond urban and semi-urban areas when it comes to domestic violence. What about women in rural areas who have no idea that this law exists or have no infrastructure to access it? If their families aren’t supportive, they will just continue to suffer."

And as the municipal worker’s case shows, even for the women who invoke the law, it can be a very long wait for justice, and a cruel one as society piles on the pressure for her to withdraw the case.

“The PWDVA mandates all cases to be settled within 60 days, but court hearings go on for months, even years. We tell victims to be patient, but the public shaming they face while awaiting relief makes them regret their decision of approaching the court," says Premi.

What about women in rural areas who have no idea that this law exists or have no infrastructure to access it? If their families aren’t supportive, they will just continue to suffer- Kamlesh Premi, counsellor working with Centre for Social Research

Resistance from within the family, despite having knowledge of a legal recourse, is a reason why women continue living in abusive relationships.

“Lack of education or financial dependence on her partner can hold back a victim from seeking relief," says Rashmi Anand, who runs the Woman of the Elements Trust, which provides legal aid and counselling to women and child victims of domestic abuse. “However, the social and family pressure to make a marriage work, especially if there are kids, can keep even educated, financially independent women from taking action. A woman is made to believe that it is her shame and not the perpetrator’s shame."

Vested interest in the woman’s property is another reason why family members turn their backs on their own sisters and daughters, says Anand.

The Act mandates state governments to appoint POs for a minimum of three years from government or non-governmental organizations. All POs are required to have at least three years of experience in fields such as social work, law, social sciences, psychology, counselling, etc.

According to a 2009 report, Ending Domestic Violence Through Non-Violence: A Manual for PWDVA Officers, published by Lawyers Collective, a public interest service provider, many of the POs drawn from the government cadre already have part-time or full-time employment in another capacity, which means that their PO duties are an additional charge.

Despite the law naming POs as the key authority in implementing the Act, they remain overworked and underpaid, says Premi.

The state fails to provide adequate infrastructure for victims, who are then left with no choice but to remain in abusive relationships

“Take the example of Delhi itself—we just have one PO for each district. These posts lie vacant in many states, which puts a lot of burden on the existing POs and states don’t even pay them well. Despite having a substantial pre-litigation role, these officers are neither given adequate infrastructure nor are they trained well to discharge their duties," she says.

The state also fails to provide adequate infrastructure for victims, who are then left with no choice but to remain in abusive relationships.

“There aren’t enough shelter homes for women and most of the functional homes are in a deplorable condition. Where will a woman go, especially when she has kids?" asks Ranjana Kumari, director of Centre for Social Research.

In Delhi alone, there are 13 shelters and short-stay homes for women, but most are shabby or overcrowded and used mainly by the underprivileged.

Even the Draft National Policy for Women, 2016, recognizes the need to improve the living conditions in state-run temporary or permanent shelters for survivors of domestic violence or any other forms of violence.

Kumari argues that the battle is only half won when a woman gets a court order in her favour.

“There is little compliance by protection officers and the police to enforce court orders," she says. “Middle-class homes usually have single-door entrances and if a victim’s right to residence in the house isn’t ensured, she may be subjected to continuous taunting and mental harassment."

Many women go for out-of-court settlements, while others continue suffering because they are either not aware of this provision or their families keep them from reporting it- Rajat Kalsan, lawyer and activist with Human Rights Law Network

The Lawyers Collective’s Women’s Rights Initiative, which played a key role in getting the PWDVA passed, has been monitoring and evaluating the Act since 2007 and points to problems of inadequate budgetary allocations, unspent budgets and unplanned expenditure on the part of state governments.

According to its sixth report published in January 2013, most states still do not have a separate budget for the implementation of the Act, while others such as Bihar, Jharkhand, Uttar Pradesh, Rajasthan and Mizoram have not formulated a scheme for its implementation.

“These are also the states which have reported a high number of cases of domestic violence. The implementation of the Act is left to the states, and it varies from state to state. And with no review mechanism, we see very low budgetary allocations and very high amounts of unspent budget," says Tenzing Choesang, technical director at Lawyers Collective.

“Even the 12th Five-Year Plan does not have any budgetary allocation for the implementation of the Act, " she says.

Tenzing is working on the next annual domestic violence report, which will be released in a few weeks’ time.

However, Kalsan of the Human Rights Law Network says that the domestic violence Act is also being misused.

“About 25-30% cases I deal with are fabricated. These are cases where the girl gets married against her will and uses this Act to file for divorce or to bring her in-laws’ family to strike a compromise," he says.

The woman’s right to residence in a shared household and an assumption that the child’s custody will go to her are two sections of the law that can be misused, says senior advocate Geeta Luthra.

However, for Indira Jaising, executive director of Lawyers Collective and one of the key driving forces of the PWDVA, biases against women need to be shed to gauge the importance of the law.

“Judges have to stop saying women misuse these laws. If courts find women misusing these laws, they have to spell out what the misuse is—has she lied? Has she cheated? Otherwise, there is no scope for misuse of this law," says Jaising. “The requirement is to prove that there is a marriage; then it’s up to the judge to give the relief or not. When judges bring misuse of the law into the picture, they give the game away. These biases need to go."

This is the second of a five-part series which looks at the landmark Protection of Women from Domestic Violence Act to examine how it protects and grants relief to victims of domestic violence.