New Delhi: The Supreme Court (SC) on Friday took exception to a report by a television channel on a case involving Sahara group and the Securities and Exchange Board of India (Sebi).

This came after senior lawyer Fali S. Nariman complained to the bench against business news channel CNBC-TV18, a part of the Network18 Group. 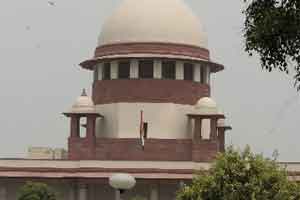 “We are distressed that even the without-prejudice proposal submitted by the petitioners (Sahara) to Sebi has come on CNBC-TV18. Such incidents are increasing by the day. Such reporting not only affects business sentiments, it also affects administration of justice," the court observed in a written order.

The bench then directed Nariman to make an application “with regard to reporting of matters which are sub judice". The court said it will pass orders on court reporting when it hears the application and also asked CNBC-TV18 to be named as a respondent, along with the National Broadcasters Association.

B. Sai Kumar, chief executive officer of Network18, declined to comment. He said he had no knowledge of the developments.

The case before the bench relates to the regulatory jurisdiction dispute between Sahara and Sebi. Sahara was asked to provide unencumbered land as security for about Rs17,000 crore it has collected from investors. Sahara had made a proposal in this regard to Sebi, which was apparently leaked and aired on the channel. The case has been adjourned till 2 March for Sebi to consider Sahara’s proposal.

Arvind Datar, a senior lawyer who flew in from Chennai to represent Sebi, said he had no knowledge of how the matter had got into the hands of the press. Pratap Venugopal, Sebi’s standing counsel before the Supreme Court, also said he did not know how the documents were puportedly leaked.

Last August, the Supreme Court tightened its eligibility criteria for journalists after a controversy broke out over wrong reporting of the Vodafone Group Plc tax dispute. On that occasion, the court had threatened to pass orders on what could be reported in a sub-judice matter, but eventually desisted from doing so after the news outlet concerned tendered an unconditional apology. The eligibility norms were also relaxed after journalists made a written representation to the court’s press committee, headed by justice Dalveer Bhandari.

Anushree Chandran in Mumbai contributed to this story.