Bangalore: For long it’s been held that inherited mental impairment cannot be treated, and pervasive developmental disorders such as autism, which affects one in 200 to one in 500 children, have remained a mystery. In new research, scientists have shown a reversal in brain defects that are involved in Fragile X Syndrome (FXS), the leading genetic cause of autism and mental retardation, offering hope that an effective cure may not be too distant.

Sumantra Chattarji of the National Centre for Biological sciences in Bangalore talks about fragile X syndrome and the difficulties in diagnosing and treating it.Download link here

A team led by Sumantra Chattarji at the National Centre for Biological Sciences (NCBS) in Bangalore, with collaborators at New York University, reports in Monday’s issue of the journal Proceedings of the National Academy of Sciences that just an hour of treatment with an experimental compound could reverse the defects in transgenic mice. These mice have been genetically modified to model the condition FXS. 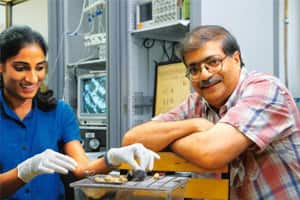 Experimental treatment: Research conducted by Sumantra Chattarji (right) and his team at the National Centre for Biological Sciences offers hope that an effective cure for Fragile X Syndrome may not be too far away. Hemant Mishra / Mint

Around 15% of autism cases arise out of FXS or some known genetic defect. Individuals with the condition, which results from a mutation in a gene on the X chromosome, suffer from a range of problems such as learning disabilities, attention problems and hyperactivity, seizures and social withdrawal.

The findings come at a time when Swiss drug maker Novartis AG made it public in April that one of its experimental drugs has shown “substantial improvement" in behaviour associated with FXS. It is now undertaking a large human trial. Incidentally, both Chattarji’s work and that of pharmaceutical firms such as Novartis and Roche zero in on the same class of drugs that block the activity of a molecule called mGluR (group 1 metabotropic glutamate receptor).

However, there’s a difference in their approach: while most studies focus on areas of the brain such as the hippocampus and the cortex that deal with cognition and learning, Chattarji’s is the only group that focuses on the amygdala, a part of the brain responsible for emotional behaviour, something critical in such disorders.

“The results of this study complement nicely the current understanding of the role of mGluR5 in the pathology of FXS and support the current global efforts to develop therapeutics which interact with mGluR5," said Fabrizio Gasparini, director at Novartis Institutes for BioMedical Research in Basel, Switzerland.

Chatterji is bolstered by the reversal of defects at the synapses—the contact points between neurons—as they occur in mature brains, the kind of patients that doctors mostly see in the real world.

“We showed our results in three-months or older mice. This raises the exciting possibility that the defects can be corrected even after it has left its mark on the adult brain; even young adults in age groups 30-40 could be treated," noted Chattarji.

The NCBS team’s work is also significant because it throws new light on the genetic defect at the origin of the disease. “There were previous studies in the amygdala, but none of those studies could identify a dysfunction, thus these (Chattarji’s) findings can be considered as a significant breakthrough," said Gasparini.

Although some of the most debilitating symptoms of FXS include severe emotional problems related to anxiety and mood instability, little was known till date about the exact nature of the synaptic and cellular abnormalities underlying these emotional symptoms.

Clearly, patients and advocacy groups are delighted. Chattarji’s work helps in understanding the broader effects of the drugs currently in development, said Katie Clapp, president and co-founder of the Fraxa Research Foundation, a non-profit organization in Massachusetts, the US, that’s focused on financing FXS research. If all goes very well, the first effective treatment for FXS could be on the market in two-three years. “But we can’t foresee how each step along the way will turn out, so we will have to keep working to advance these studies," Clapp said.

Fraxa has been working closely with Chattarji to establish trials of investigational new drugs or existing drugs in India, but has had limited success on that front, so far, said Clapp. As the parent of a young man with FXS, Clapp is “extremely excited by the present finding and the prospects" that a treatment will emerge for both children and adults with FXS.

Chattarji, who is also collaborating with Pfizer Inc. in this area, hopes to better the drugs as he takes up more in-vivo, or animal-model, studies that may even unlock causes of autism and similar disorders. “I am glad this (FXS research) is moving fast on the global drug discovery path," he said.