10 years on, Sonia Gandhi is a little less of an enigma

10 years on, Sonia Gandhi is a little less of an enigma

I know that I was reconciled to five more years of the Bharatiya Janata Party (BJP). Even Congress president Sonia Gandhi herself seemed surprised by the victory, and joked about it at the first Hindustan Times Summit she attended after the election.

“I bet none of you thought that we would be in power," she told the audience in the course of her speech. I asked her if she had expected to win. She was honest enough to say that she hadn’t dared hope for victory.

Even after the nation had got accustomed to the idea of its first Congress government in eight years, most people still believed that Sonia would be prime minister. That she stunned India by refusing to accept the job tells us something about the limited nature of her ambition. More significantly, it also tells us how little we understood her or her motives.

Ten years after she first became Congress president—on 14 March 1998—Sonia Gandhi is no longer regarded as a Sphinx-like enigma. We know more about her than we did when she accepted the top job in India’s oldest political party. But because of her essential shyness, her aversion to media exposure and her taciturn nature, we are still not clear about the things she really stands for. Nor have we entirely understood her style of operation.

I don’t claim to be much of a Sonia Gandhi-watcher. But, on the basis of three long interviews (in 1999, 2004 and 2006) and several sessions at HT Summits, here are some thoughts about Sonia, her views and her style. 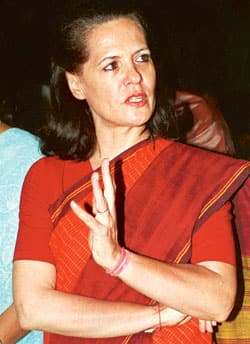 Less obvious contrasts are with her mother-in-law and her husband. Indira Gandhi believed in big government. Sonia is deeply sceptical of the ability of a corrupt and inefficient governmental structure to deliver change or benefits to the poor. More than any major Indian leader before her, she believes in the sincerity and effectiveness of voluntary organizations and NGOs. Rajiv Gandhi was a modernizer, setting India on the road to the software revolution of the 21st century. Sonia believes that modernization is now a given. Her priority is to ensure that the gains of the new prosperity should reach those in the villages and on the margins of society. Hence the National Rural Employment Guarantee Scheme, and hence the loan waiver in the Budget.

Unlike the other Nehru-Gandhis, Sonia Gandhi was not brought up in the prime minister’s house. Perhaps, as a consequence, she has less of a sense of entitlement, is deeply suspicious of flattery, and has avoided developing any kind of court. 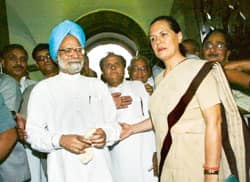 Sonia’s style is entirely different. She has perhaps two or three close friends, and they take pains to keep quiet about the extent of their friendship with her. Her personal staff has no authority whatsoever. And within the Congress party, there are no favourites or confidants. Her single most important adviser, Ahmed Patel, has an institutional role as her political secretary.

It is hard to conceive of any other member of the Nehru-Gandhi family giving away the kind of authority she has to Manmohan Singh. It is fashionable to portray the Prime Minister as her cipher, but the truth is that she seems in awe of him, always defers to his intellect and experience, and rarely involves herself in administrative matters. For instance, at least three members of the present council of ministers would never have been sworn in if it was up to Sonia. Similarly, the nuclear deal is his baby, and she has gone along with it because she trusts his judgement.

Perhaps this is why the division of power between the Congress president and the Prime Minister has worked. The government has followed Sonia’s broad agenda—liberal economics with an inclusive emphasis—and she has been content to let the Prime Minister get on with the job as he sees best.

Read: Living Politics: What India has taught me (Lecture by Mrs Sonia Gandhi)