We want plurality in media: Khullar

We want plurality in media: Khullar

New Delhi: Ownership across television, radio and print media, the political hot potato for the ministry of information and broadcasting (MIB), is back in Telecom Regulatory Authority of India’s (Trai) court although the regulator sent its recommendations to the government three years ago. Before floating a fresh consultation paper on the subject, Trai chairman Rahul Khullar has started a public debate on issues related to entry barriers, ownership and market shares across media categories. In an interview last week, he said partial refarming of radio spectrum is a possibility for the telecom sector. Edited excerpts:

Was there an immediate trigger for reviving the debate on restricting cross-media ownership?

Trai gave its recommendations on cross-media ownership to MIB more than three years ago. The ministry also commissioned the Administrative Staff College of India (ASCI) for a study on the subject, which was completed. Nothing really moved after that. Now in 2012, the ministry has sent it back to us asking for a final set of recommendations. That is the trigger, if you want to call it a trigger.

But this was waiting to happen in a much broader sense in the Indian context for two or three reasons. Convergence in networks is taking place. Entertainment and media is no longer being delivered through traditional channels any more. They come to you through a telephone wire, satellite, cable...

Second, look around what is going on in media. Over the last many years, there have been a number of problems. The most obvious one is the scandal in the UK, at the News of the World. Look at our own history. We have not had that kind (News of the World) of problem, but if we go back a couple of years ago, what were the Niira Radia tapes all about? That called into question the manner in which media and politics mixed. And what a combustible combination that can be. For all these reasons, it is extremely topical to start talking about media, its ownership, its power and the regulation thereof.

Is cross-media ownership such as big scare? 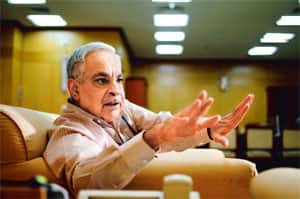 So you will regulate the person with presence in three media.

But it is. No other country has more than 70,000 registered newspapers, six satellite TV operators and more than 500 TV channels. There is enough plurality.

In many of these markets, there are ownership and market-share restrictions. You cannot own more than 20% or 30% across different media. In some places, if a newspaper has more than 30% or 40% market share, the regulator starts chasing him. We want plurality. And, we will, in the interest of bigger goals of nurturing democracy, impose restrictions on ownership across forms of media, and specific ownership in particular forms and definitely in terms of market share so that it does not sway public opinion.

Aren’t such restrictions irrelevant in the age of digital and social media such as Twitter?

I don’t think what is written on Twitter and Internet is enough of diversity and plurality. Good luck to the young people who spend a lot of time on Facebook and Twitter. It does not shape or change public opinion in India.

It is very easy to say this but when you start looking at actual market shares and at horizontal ownership and control, you find trends which you need to worry about. In the south, 70-80% market share is cornered by one person who owns TV networks, newspaper, magazines, radio stations. Are you telling me there is nothing to be worried about?

Do we have an ecosystem to switch to digital cable mandated by the government?

The problem is the stand-off between broadcasters and MSOs and cable operators. They are not negotiating with each other. For years, under-reporting of subscribers resulted in the downstream guy getting rich at the cost of the upstream broadcaster. But a digital footprint means I can track the number of consumers… It will change the balance of economic power in favour of broadcasters. Also, the MSOs will incur all the capital costs in putting up the set-top boxes and the broadcasters will get more for doing nothing. Third, MSOs are used to carriage fee. But broadcasters say if you ask for more carriage fee, I will ask for higher bulk rate for my programmes.

In the telecom sector, operators are complaining about removal of combo packs and processing fee.

About a week ago, Trai issued a consultation paper seeking the views of the industry on why the processing fee should not be reduced. On low-value recharges, there is a very high processing fee that eats into the talk time that you actually provide to the customer. And the person who buys a low-value charge is not a rich person and that is why it needs to be addressed. Again we went through a process of consultation and a decision was taken not to permit combo packs. All I will say at this point is we are revisiting the matter to see if it is possible to open that window with safeguards, to ensure that people who want to purchase pure vanilla recharges get it.

It’s absurd proposition. Tariffs have always been under forbearance for the last so many years. We don’t look at individual tariff plans.

That is what Trai claims but companies say that if they get together and raise rates, Trai may intervene.

A regulator is free to intervene if he thinks something silly is being done. That regulatory authority cannot be abandoned. But for the companies to say that Trai has been whimsical or has attempted to interfere, please give me examples in the last five years when a tariff plan mooted by a company has invited any objections.

We have actually practised forbearance. I will tell you the sorts of things we have intervened in… In one case, a tariff plan was devised to illegally steal customers from another guy in breach of Trai regulations.

If tomorrow the 2G spectrum auction happens and as companies say the rates are too high, will you or will you not let them raise tariffs?

We will continue forbearance provided the increase is not unreasonable. Suppose tomorrow morning, all the telecom services providers gang up as a cartel and decide to raise the prices to a rupee overnight, forget me, even the Competition Commission of India (CCI) will chase them.

Is there a rethink on the refarming issue? It is not very practical to move from 900 to 1,800 megahertz. It will cost more to put up towers.

But it is not as efficient.

Yes, it is not as efficient. You will incur an extra cost. All those extra costs, capex and opex, have been factored into the calculation. When you re-farm, three costs are incurred— by moving from 900 to 1,800 MHz spectrum, you pay a higher price for the 1,800 MHz spectrum. Two, your capital expenditure goes up because you have to have more towers. Three, the operating expenditure goes up because the fuel consumption also increases…

Will this be in a phased manner?

That is what is called partial refarming. You hold some in 900 and the rest in 1,800. Even today, the GSM operators, some own only 900 spectrum but some own 900 and 1,800. Some dual technology operators own 800, some own 1,800. We are saying refarming has to be done. Sheer practicality dictates that it may not be possible for everybody to get the 1,800 spectrum because there is not enough available.

I think these two issues need to be carefully looked at—one, mergers and acquisitions and, two, trading of spectrum. The problem today is this: You got administratively priced spectrum for 500 crore. The value of that spectrum today is 25,000 crore. If you sell your company and we permit spectrum to be sold, you will make a killing of 24,000 crore for doing nothing. How can we permit that?

As long as spectrum was given to you at an administered price and not at a market-determined price, it is unfair for the company to say it wants to be able to sell it at a market-related price.

Once the next round of 2G auction happens, this problem will not exist.

That sort of issue we have started looking at. Spectrum may be nationally owned but if you paid a huge price for it and that price was market determined, why then should you be barred from trading it?