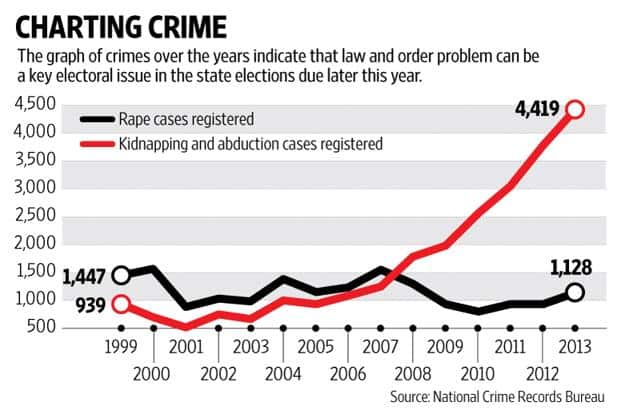 New Delhi: Ram Vilas Paswan, Union minister and chief of the Bihar-based Lok Janshakti Party (LJP), has said that the law and order situation in Bihar has worsened over the years and claimed that chief minister Nitish Kumar has not done enough to curb this problem.

“The law and order situation in Bihar is bad; there are murders and rapes every day," Paswan said in an interview to Mint on Monday. The Union minister of consumer affairs, food and public distribution was pointing to a problem that has been raised during election time in the past two decades in Bihar.

Kumar, a Janata Dal (United) leader, has been chief minister of Bihar since November 2005, barring a nine-month period last year when Jitan Ram Manjhi took over. Until June 2013, the Bharatiya Janata Party (BJP) was also part of the Kumar-led government.

From 1999 to 2005, Rashtriya Janata Dal’s (RJD) Rabri Devi led the state with an exception of one week where Kumar took over the chief minister’s post.

As far as data on rape cases are concerned, barring some spikes, the state saw a consistent decline in numbers from 2007 to 2012 until the number shot up in 2013, when the JD(U)-BJP alliance was in power. The maximum number of rape cases seen between 1999 to 2013 were in 2000 when 1,570 cases were registered.

The RJD government in Bihar was voted out in 2005 amid the deteriorating law and order situation in the state.

Political experts feel that law and order problem can be a key electoral issue in the state elections due later this year.

“It’s a known fact that law and order situation has always been weak in Bihar. Neither can we blame jungle raj for the increase in rapes and kidnappings of women nor can we blame Nitish Kumar’s governance for that. No political party will want rapes to increase in any case, irrespective of it being in power. I would say it is the mindset, people’s mentality, that needs to be changed... More than blaming the government, it’s the civil administration that needs to be looked into," said Shashi Sharma, head of the political science department, Patna University.

While the BJP has attacked Kumar on the issue, the JD(U) has defended its government saying that the state has progressed. “A station house officer is shot. This simply shows there is no fear of law in people. Increase in rapes, kidnappings and abduction of women is very unfortunate. In our country, we have laws that would never let such events take place, but there is no one to obey them. If there is no fear of law, there will obviously be jungle raj. Nitish Kumar has no control over the police. Transfer of IPS and IAS officers is another example. They are doing this so that their people in this alliance can be given these positions," said Kirti Azad, BJP parliamentarian from Bihar.

“Rapes and kidnappings have not increased. It is the opposition’s trick to misguide people. Paswan will obviously say this but we know how much progress there has been in Bihar," said Anil Kumar Sahani, Rajya Sabha member of the JD(U).