Bidding rule change may usher in coalfield auctions from April

Bidding rule change may usher in coalfield auctions from April

New Delhi: India plans to auction coalfields for exploration and production for the first time to increase output and meet the nation’s rising demand for the fuel.

The licences may be offered after April under new rules being considered by lawmakers, K.S. Kropha, joint secretary in the coal ministry, said in an interview in New Delhi. 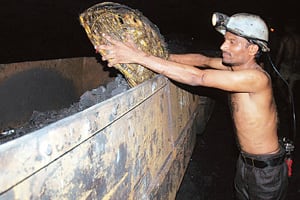 Exploring options: A worker at a Singareni Collieries’ mine near Hyderabad. Auctioning will make allotment of permits more transparent.

The change will allow the ministry to invite bids for coalfields instead of allotting them to companies.

“We expect Parliament to approve the commercial mining Bill in the current Budget session," Kropha said. “We will need to see if the new system will be in place for allocating the blocks."

The government may start auctioning coal and lignite fields to make the allotment of mining permits more transparent, minister of state for coal Dasari Narayana Rao said in Parliament on 28 February. The law currently requires the local administration to seek government permission before giving mining leases.

India wants to increase the production of minerals such as crude oil and coal to meet the energy needs of Asia’s third largest economy. The nation, one of the five biggest buyers of coal, uses the fuel for half its generation capacity.

India allotted 53 coal areas with reserves of 13.8 billion tonnes to government-owned and non-state companies between April and January, finance minister P. Chidambaram said while presenting the Union Budget on 29 February. The government also plans to appoint a coal regulator.