New Delhi: The Nuclear Suppliers Group (NSG) began deliberations in Vienna on Thursday on whether or not to exempt India from restrictions on trade in nuclear fuel and technology and clear a new draft of the Indo-US civilian nuclear agreement, even as New Delhi maintained a tense silence over the leaked contents of a letter to The Washington Post on Wednesday stating that the US would immediately stop all nuclear trade with India if it tested a nuclear bomb. 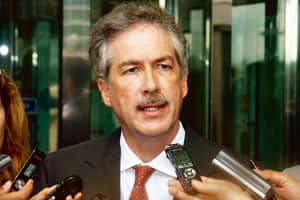 Still hopeful: U.S. undersecretary of state William Burns, who leads the US delegation, speaks to reporters on Thursday in Vienna. NSG has asked that India explicitly say it would not conduct a nuclear test. Ronald Zak / AP

These people added that the government would issue a statement on its clean nuclear credentials.

No such statement was issued till late Thursday evening, but the same people confirmed that Prime Minister Manmohan Singh as well as external affairs minister Pranab Mukherjee had been on the phone till late last night after the leak, trying to convince various world leaders that India’s entry into the NSG could only enhance the international non-proliferation regime.

Ireland, Austria, New Zealand, the Netherlands and Switzerland are among the countries Singh and Mukherjee spoke to.

India has maintained in Parliament and in its representation to NSG that it retains the sovereign right to conduct a nuclear test. The leaked letter from the US state department to the then chairman of the house foreign affairs committee Tom Lantos (Berman is his successor) says that the US will effectively call off the deal if India does this.

Significantly, NSG, in recent meetings, has asked that India explicitly say it would not conduct a test.

It has also demanded that India not be given so-called enrichment and reprocessing technology, and that a periodic review be conducted to see if the country abides by all these restrictions.

A nuclear analyst who did not want to be named said the “next 36 hours are critical". If the US is able to put pressure on the dissenters in NSG to fall in line or to hammer out a compromise where India would promise to do all of the above and this promise would reflect in the “non-operable portions of the NSG chairman’s report", then the crisis would be averted, the analyst said.

Meanwhile, in New Delhi, Robert Blackwill, former US ambassador to India and a current analyst at think tank Rand Corporation, said in a seminar that if the NSG could not arrive at a consensus over the next two days on giving that all-important waiver for India, the US should push to “end the consensus rule" and introduce the vote at the NSG.

“It is completely bizarre that a handful of countries who have very little to do with India could come in the way of wrecking this nuclear initiative," Blackwill added.

While Blackwill said he didn’t think the leaked letter was relevant or important, a Western diplomat who did not want to be identified admitted that it “would create grave misgivings among the doubters in Vienna."