While the percentage of women turning out to vote showed an upswing, the number of women candidates fell well short of proposed reservation laws

New Delhi: In a year when women’s rights and voices of India’s urban youth have dominated the air waves, the percentage of women turning out to vote continues its slow but steady climb. Representation by female political candidates, however, still falls short, highlighting the divide between rhetoric and reality.

Nevertheless, a growing movement for change, and a new confidence in the untried— highlighted by the Aam Aadmi Party’s (AAP’s) remarkable success in the capital—seems to mark a cusp in the political future for women and youth in a landscape long dominated by ageing men, experts said. Worthy of note, they said, was a marked tendency in Delhi and Rajasthan for first-time voters to lean toward a single party (respectively, the AAP and the Bharatiya Janata Party).

Across the four states where votes were counted on Sunday, Chhattisgarh saw a high of 77.27% of the total female electorate turning out to vote, Madhya Pradesh recorded 70.11%, Rajasthan 75.33% and Delhi trailed at 64.68%, which was still significantly higher than the 56.62% recorded in 2008.

At the same time, the number of women candidates fell well short of the one-third recommended by proposed reservation laws. In Delhi, just 70 women were fielded out of 810 candidates. The contrast suggests a mismatch between the electorate and political parties, said Sanjay Kumar of the Centre for the Study of Developing Societies, a Delhi-based research institute. 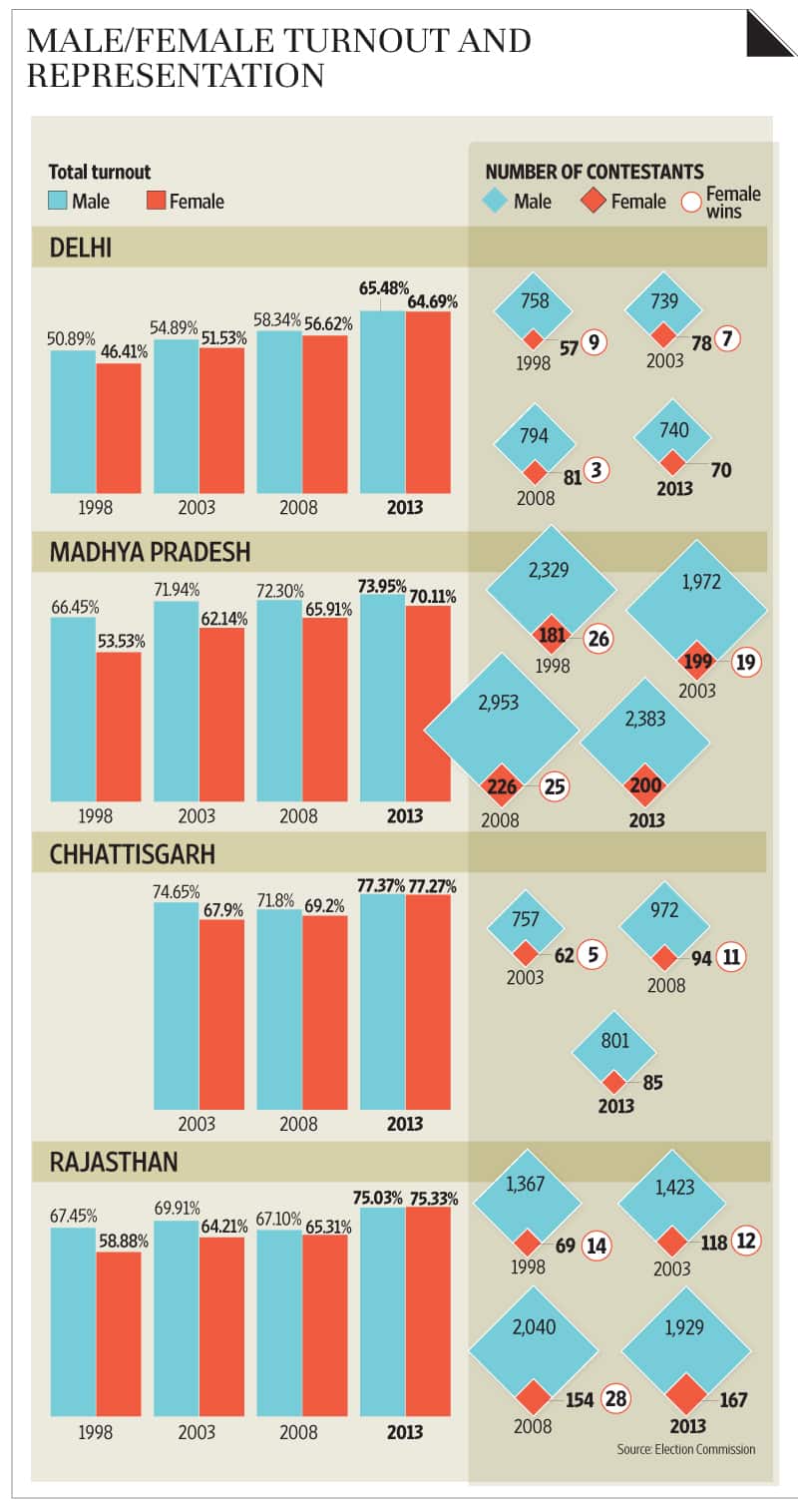 “It’s two different things. One is the response of the voters and the other the response of political parties," Kumar said. This state of affairs may be about to change, he said, as a delayed result of the reservation for women in the panchayati raj (which began in 1993 and was increased to 50% in 2009). “What has happened is that more women have started contesting in those elections, and after two, three elections or 15 years these women have started realizing that they have power. I think the turnout among women will be higher in the next Lok Sabha elections," Kumar said.

In the capital at least, leaders of all three major parties had made pre-election commitments to the cause of women’s rights, reacting to pressure from activist groups, professionals and ordinary citizens. An opinion poll of 3,061 people across Delhi, published in the Hindustan Times the week before the elections, showed that 93% viewed women’s safety as an election priority.

Sheila Dikshit, at 75 the longest-serving woman chief minister in the country, was ousted from her New Delhi seat by the AAP’s Arvind Kejriwal. Last week Dikshit announced her support for a six-point plan to enhance women’s safety and access to legal recourse—the so-called Delhi Womanifesto, put together by women’s rights campaigners—promising to implement it within the next year. The AAP also announced its support for the plan, and the BJP gave in-principle support.

“Those misconceptions remain in terms of who gets tickets. The fact that only about a fifth of candidates are women, and that too privileged women that are safe bets, means that you have to be much more likely to win than the man you are competing with, much more competent, (and) have access to more resources to even get a foot in the door."

Nundy said the agendas of women voters were not limited to women’s rights issues. “Part of the reason that so many women have come out to vote is that women’s concerns are related to corruption and governance and inflation as well as the freedom of citizenship," she said.

4 December’s turnout also included a high number of first-time voters, who are beginning to register with politicians as a political category of their own, said Kumar. In Delhi, Kumar said, “Certainly there was a big edge. First-time voters were voting for AAP in large numbers; we are expecting about 40% of them to have voted for AAP." In Rajasthan, first-timers also voted overwhelmingly for the BJP, said Kumar. Those in Chhattisgarh and Madhya Pradesh, however, showed no particular preference for a party, he said.

“Usually we don’t see young voters having a different choice (to the rest of the electorate), but in this election we saw different political preference among young voters, so we can see them as a political category and political parties are realizing that need to mobilise them," Kumar said. “It’s not so much in the rural areas—there they are more interested in caste or religion."

The urban youth will still need to be wooed, and the principal parties will keep that in mind going into the general election, Kumar said. “Because of their education, it’s expected that they have a different outlook, that they would be more independent minded. Congress is trying to give more tickets to young people; (party vice-president) Rahul (Gandhi) is always advocating bringing more young people into politics."

He isn’t the only one. The AAP fielded the 26-year-old former journalist Rakhi Birla in Mangolpuri, Delhi. She beat her opponent, Raj Kumar Chauhan, a seasoned Congress politician, winning 44,383 votes to Chauhan’s 33,798. Birla did not respond to phone calls or messages for comment on Sunday.

If anything, the lack of reputation may have worked in such candidates’ favour, Nundy suggested. “The AAP is a bit of a rebel party, it’s against entrenched traditional party politics. Kejriwal was a leader of the anti-corruption movement that cut across class and became so large. Its origins are very different."