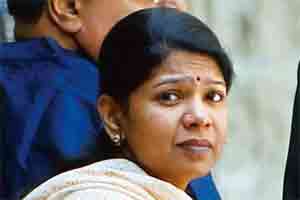 The order is also seen as an embarrassment for the Central Bureau of Investigation (CBI) as it did not object to five of the accused seeking bail. The court had accepted the agency’s plea to apply stringent charges of causing losses to the exchequer on all the 17 accused, a crime that is punishable by life imprisonment. The framing of charges paves the way for a trial of the accused that will start on 11 November.

Kanimozhi, whose party is a key ally of the ruling Congress-led United Progressive Alliance (UPA) coalition, and the other accused have been in jail for at least the past five months. The accused will now have the option of appealing in a high court.

Although the rejection of bail for Kanimozhi has worsened the troubles of the DMK, which lost the April-May assembly polls in Tamil Nadu, its leaders ruled out snapping ties with the ruling Congress party. The DMK’s 18 MPs in the Lok Sabha extend crucial support to Prime Minister Manmohan Singh’s government.

The CBI has accused Shahid Balwa of favouring Raja, who has been in jail since February in the same case, by investing ₹ 200 crore in Kalaignar TV as quid pro quo for getting telecom licences. The money was allegedly routed through Asif Balwa, Aggarwal and Morani. Kanimozhi, who is one of the promoters of Kalaignar TV, and Kumar were arrested and charged with conspiring to receive bribes for awarding the licence.

“On the basis of medical papers already on record, it cannot beheld the standard of the illness of the accused Karim Morani is so high as to categorize his custody as a detrimental to his health. Accused Kanimozhi belongs to upper echelons of the society and is also a member of Parliament (MP). By no stretch of imagination she can be set to be suffering from any discrimination on ground of being a woman alone," Saini said in the order.

The CBI had not opposed to the bail pleas of Asif Balwa, Aggarwal, Morani, Kumar and Kanimozhi. Saini, however, said the federal agency’s no objection has no legal consequence in the eye of the law.

The top leadership of the DMK and Kanimozhi’s family members, who were present in the court room hoping that the party MP would be released from jail, were visibly upset.

Although they refused to react publicly, at least two DMK leaders said the party will be looking at resolving the crisis legally. There was no talk of breaking ties with the Congress party, one of the leaders said.

“The Congress has gone out of the way to help him. He is not in a position to choose now because he is in a very sticky wicket in Tamil Nadu," Cho Ramaswamy, editor of Chennai-based Thuglak weekly, told CNBC-TV18.

The Congress party reacted cautiously. “A superior court or even a concurrent court can come to a finding which may be different from what the original court has said," said Congress spokesperson Manish Tewari.

Mint’s S. Bridget Leena in Chennai, PTI and Bloomberg contributed to this story.