How does Indian investment in Africa compare with China’s?

“India’s sustained effort is making an impact on Africa… India’s share of announced greenfield projects grew from 3.3% in 2003-08 to 6.1% in 2009-15. In the same period, the investment from China decreased from 4.9% to 3.3%," said finance minister Arun Jaitley at the 52nd annual general meeting of the African Development Bank (AfDB) at Gandhinagar. Jaitley’s statement suggests that India has become a dominant economic partner of Africa in comparison to China. A detailed look at FDI and trade related statistics does not support such a view.

According to the latest World Investment Report published by the United Nations Conference on Trade and Development (UNCTAD), China’s total FDI in Africa is much more than India’s. Both India and China were minuscule players in terms of FDI in Africa, and India was ahead of China till 2009. However, China has surged much ahead of India between 2009 and 2014, latest figure for which data is available. 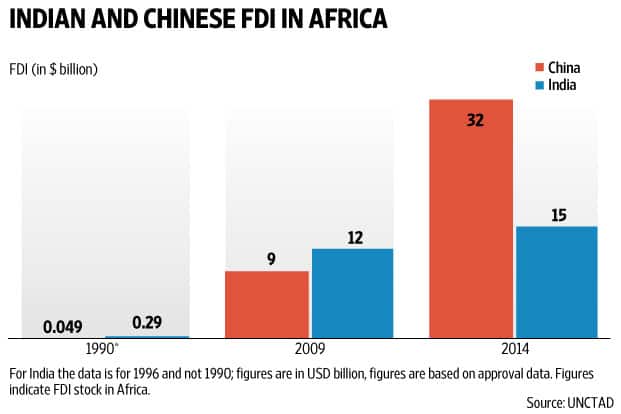 To be sure, headline figures on Indian FDI in Africa might have a spurious element because of the role of Mauritius, which has been known to be a round-tripping destination for bringing back money as FDI into India. Centre for Monitoring Indian Economy’s database shows that outward FDI from India to Mauritius between 2008-09 and 2016-17 was accounted for 17% of total outbound FDI from India. Mauritius also accounted for 31% of FDI inflows into India during this period. It would be interesting to see whether this number declines after India has signed a double tax avoidance agreement with Mauritius in May 2016. 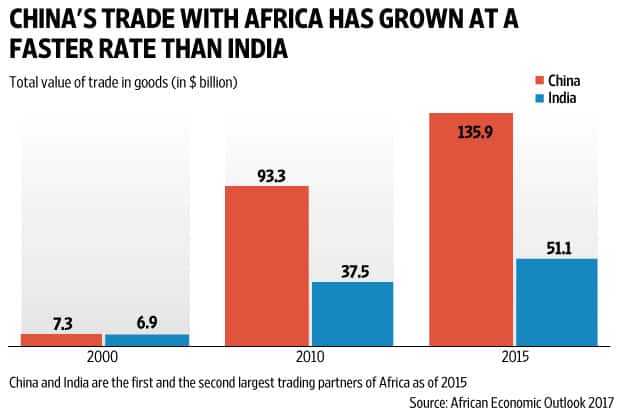 An earlier Plainfacts column which had looked at the trading pattern of India and China with Africa had found that increasing trade of the two major Asian economies has been accompanied with import of raw materials from Africa and export of finished products to the continent. The column also argued that just the fact that this pattern was also observed during the colonial period, did not necessarily mean that Indian and Chinese capital in Africa was unleashing colonial exploitation like earlier times. The column also argued that while Chinese FDI has been accused of bringing in a lot of Chinese labour, which means that a large amount of earnings are repatriated, India’s relatively small presence might have saved it from a greater scrutiny.

With increasing economic engagement, the fate of India-Africa ties would depend on not just quantitative factors such as trade and investment, but also a strategy that convinces the African people that economically engaging with India would be mutually beneficial.