Are Akhilesh Yadav’s claims of development in Uttar Pradesh correct?

In an attack against Bahujan Samaj Party (BSP) leader Mayawati, Uttar Pradesh chief minister Akhilesh Yadav, on Monday said that if the people of the state vote for development, they would elect the Samajwadi Party (SP) government again as it has outpaced the previous government on the development front.

A quick analysis of some of the development indicators in Uttar Pradesh suggests otherwise. The present SP government was elected in 2012 after it defeated the BSP, which was in power in the state from 2007-2012. Before this SP’s Mulayam Singh Yadav was the chief minister of the state from 2003-07. To compare the development record of SP and BSP, we have compared indicators for the previous two regimes and latest available figures for the incumbent Akhilesh Yadav government.

In terms of economic performance the BSP seems to be ahead of SP with a higher growth rate of gross state domestic product (GSDP) in comparison to the period when the present and previous SP governments were in power. A sectoral analysis reveals that the BSP government was better at delivering agricultural growth than both SP governments. On the industrial front, UP has been witnessing a continuous decline with growth rate falling under successive regimes.

The back-to-back droughts in 2014 and 2015 might have been an important reason for subdued agricultural performance during the present government’s tenure. Uttar Pradesh has been behind the national average in terms of overall growth rate during all these periods. As far as serious crime is concerned, UP seems to have seen deterioration after the present SP government took over. Reported rates of serious crime have gone up in the last three years during SP’s regime. While this could partly reflect better reporting, the reporting effect is unlikely to explain all of it. 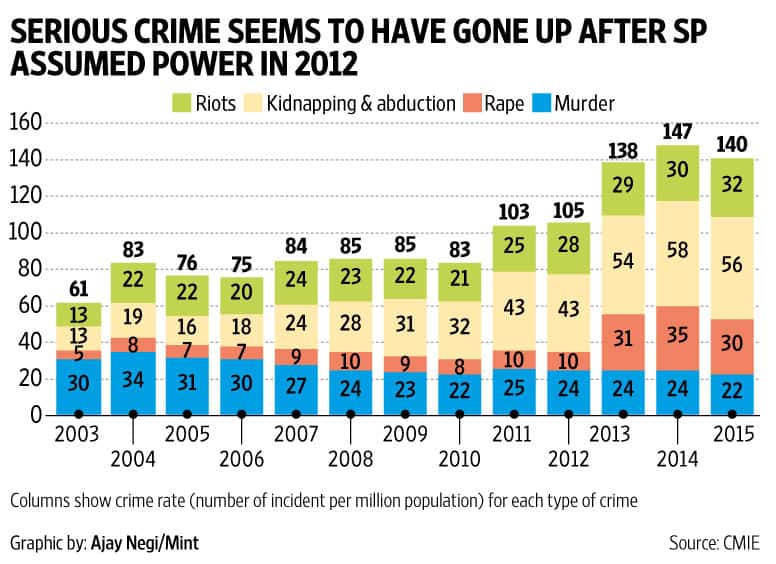 An analysis of other social indicators such as learning outcomes, decline in infant mortality rates (IMR) etc. shows that there is no major difference in the achievement of both the SP and the BSP and the state continues to fare poorly. For instance, annual decline in IMR was 2.5 under both the BSP and present SP government according to latest data.

The short point is, there is no strong evidence to suggest that SP has a better development record compared to the BSP in UP. If anything, the above analysis suggests, the BSP might have an edge.