Census 2011 shows Islam is the fastest growing religion in India

Proportion of Hindus, Sikhs, Buddhists shrank, while there was negligible change for Christians and Jains, show data

New Delhi: Muslims are the fastest growing group in the religious mosaic of India, according to data released on Tuesday by the Registrar General and Census Commissioner that experts said reflected a global trend and low infant mortality rates.

The data, which could potentially revive a fractious debate on religion, reveals that the proportion of Hindus, Sikhs and Buddhists in the total population shrank in the decade to 2011, while there was negligible change for Christians and Jains. 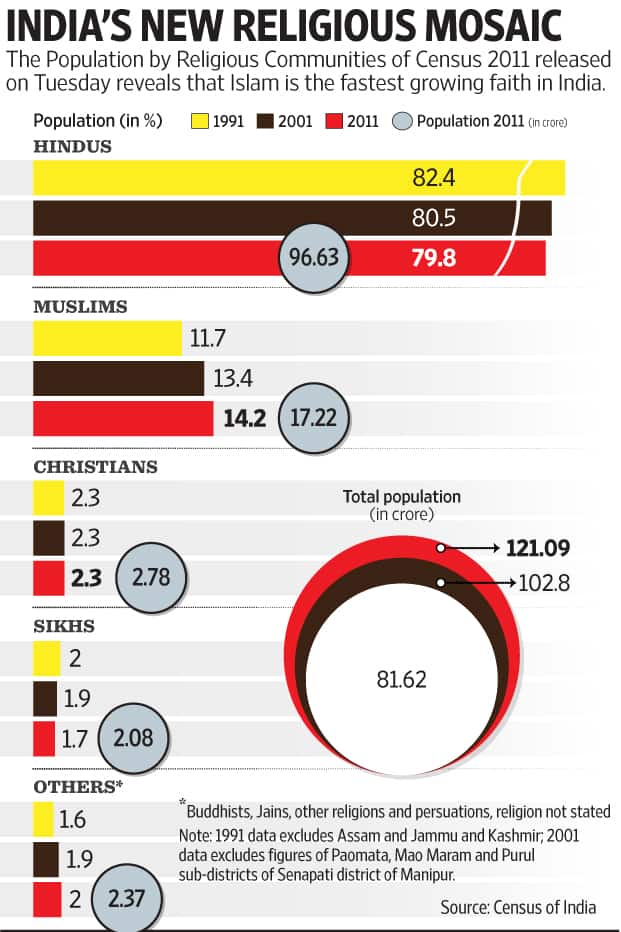 Experts said the figures reflected a global trend—not something unique to India.

“Even the recent Pew Research Center study showed Islam is the fastest growing religion (in the world). Muslim infant mortality is lower than other religions—this effect can be seen in the number of births per woman, which means Muslims have a higher total fertility rate than that for Hindus and Christians," said Javid Jamil, a medical doctor and scholar of religions.

According to The Future of World Religions: Population Growth Projections, 2010-2050, a research study conducted by Pew, between 2010 and 2050, the population of Muslims is expected to increase 73%, to 2.8 billion, resulting in an increase in their proportion in world population from 23.2% to 29.7%. The study highlighted two contributory factors—the lower median age of Muslims (23 in 2010 as compared with 30 for non-Muslims), and the higher number of children a typical Muslim woman bears (3.1 as compared with 2.3 for non-Muslims).

Still, “there is not only an overall decline in population growth but also a sharp decline in the growth rates of both Hindus and Muslims", Jamil added.

Previous surveys may have also been a little inaccurate, said one expert.

“We cannot ignore (the fact) that the census did not cover Assam in 1981 and Jammu and Kashmir in 1991. So, in such cases, a proxy variable was taken into account. So the numbers were approximate," said Mohd. Shahid, a professor in the department of social work at the Maulana Azad National Urdu University, Hyderabad.

All states were covered by the 2001 survey. Some experts are worried about the implications of the data release.

“The political dimensions are that it could be misused to stir up communal tension. There is data to prove there is equal incidence of poverty among Hindus and Muslims, so the drop in the rate that we see for the majority community can be attributed to urbanization, mobility and higher income group families. These factors contribute towards smaller families, which we eventually see reflected (in the data)," said professor Balveer Arora, former rector and pro vice-chancellor of Jawaharlal Nehru University.

Ashwaq Masoodi and Nikita Doval contributed to this story.