New Delhi: In a move that will hasten India’s shift towards a cashless economy, the government on Thursday announced a slew of measures to encourage digital payments, exactly a month after its decision to scrap high-value banknotes.

Using a mix of monetary incentives and waivers of taxes and transaction fees, the government sought to reduce the usage of cash for the sale of fuel at retail outlets of state-owned companies; the purchase of inter-state rail tickets and monthly passes in suburban rail networks; the purchase of insurance policies; and payments made to central government departments and public sector firms.

It also sought to address infrastructure bottlenecks in rural areas that are hindering the move towards a cashless economy. 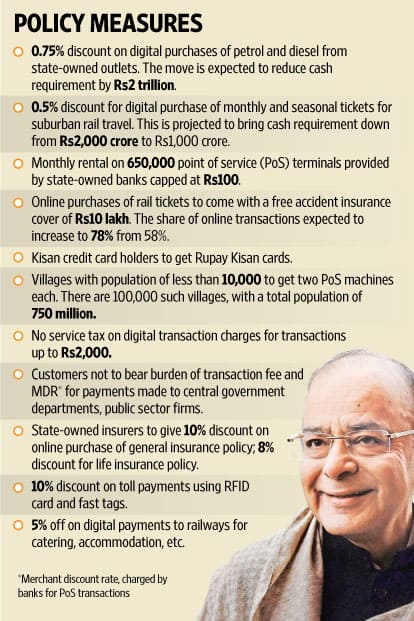 There is no end date (as of now) for these incentives, which will be notified over the next few days. The cost of these incentives will be borne by the respective government departments.

Finance minister Arun Jaitley said there has been a movement towards digital transactions from cash transactions since the government announced its decision to invalidate existing Rs500 and Rs1,000 notes with effect from 9 November.

“The government wants to increase the pace of this switchover," he said at a press conference.

In the process, the government is also seeking to reduce the cost of handling cash and bring in more transparency. A 5 October report by Visa pegged the cost of cash at 1.7% of India’s GDP. It estimated that even a 0.4 percentage point reduction in this proportion over the next five years could lead to savings of Rs4.7 trillion.

“There is a cost of transacting in cash. It has to be borne by the economy and also by the political system," Jaitley said, adding that the move to digital payments should also lead to transparency in political funding.

Jaitley hoped that the private sector will be forced to follow suit and offer these incentives given the competitive market.

The government’s digital push comes at a time when there is a severe cash shortage, especially in rural areas. At the same time, there has been a rapid growth in digital wallets.

The government hopes that reducing the usage of cash and encouraging more electronic transactions will help create a paper trail for all transactions and help curb the creation of black money. This will, in effect, increase the tax base and add to tax revenues.

To ensure that the cashless push is pan India and led by Indian states, the government last week appointed a high-level panel comprising six chief ministers and experts such as Nandan Nilekani, former chairman of the Unique Identification Authority of India, to chart out a roadmap for adoption of digital modes of payment. The panel, led by Andhra Pradesh chief minister Chandrababu Naidu, met bankers and the central bank on Thursday and will submit an interim report in the next few days. The panel has suggested that the use of smartphones that can perform biometric authentication as mini-ATMs.

Most banks have agreed to these suggestions, said Naidu.

Paying digitally will lead to reduction in costs, which should be passed on to consumers, said Naveen Surya, chairman of the Payment Council of India.