Home / Politics / Policy /  GST collections inch up in July to ₹ 96,483 crore on e-way bill usage
Back
Share Via

GST collections inch up in July to ₹ 96,483 crore on e-way bill usage

New Delhi: Revenue receipts from goods and services tax (GST) rose marginally to ₹ 96,483 crore in July, indicating the efficacy of e-way bills now compulsory for shipment of goods within states and across the country in checking tax evasion.

The improved tax receipts come in the wake of higher tax filings in July, said the finance ministry. About 6.6 million returns (referred to as GSTR 3B) have been filed up to 31 July. In June, 6.46 million returns were filed. GST receipts in June stood at ₹ 95,610 crore. 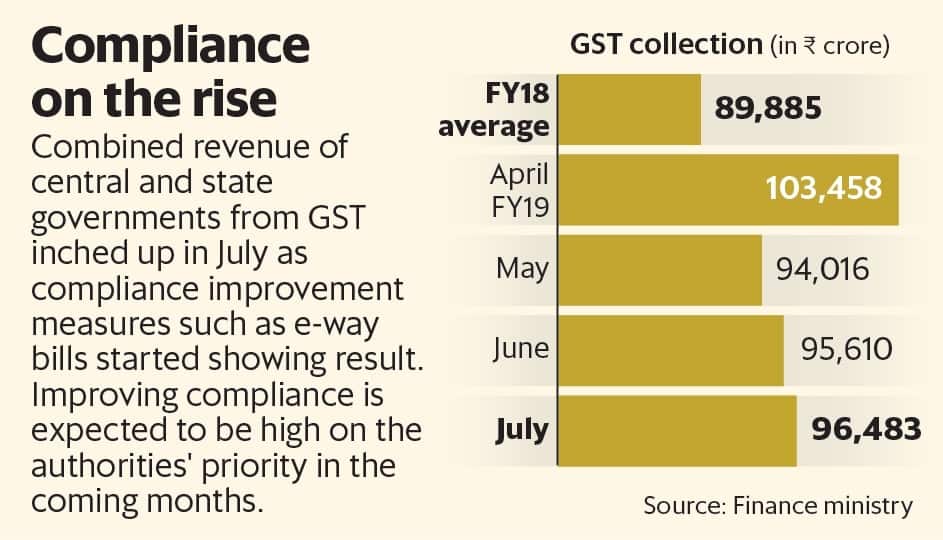 July’s revenue collection, which relates to June sales, does not reflect the latest round of tax cuts that came into force last Friday. As this could slow down revenue growth, the tax authorities are likely to keep compliance high on their priority. The Centre is banking on robust revenue collections from corporate and personal income taxes as well as petroleum products, which are outside GST, for revenue growth.

The finance ministry said that ₹ 3,899 crore has been released to the states as GST compensation for the months of April-May.

“GST revenue collections are improving from last three months after implementation of e-way bill which is a major tool to curb tax evasion," said Vishal Raheja of Taxmann, a publisher of tax and corporate law books. The latest rate cuts will hit revenue collection in the short run, but demand for goods will rise because of lower prices, which will boost collection in the long run, he said. Finance minister Piyush Goyal had said while announcing the rate cut that its impact will be minimal on the exchequer.

Union minister Arun Jaitley said last week that the GST Council has cut tax rates on 384 goods and 68 services at a revenue loss of ₹ 70,000 crore.

Economic activity is typically slow in the monsoon season and is expected to pick up in the months ahead, Goyal said on Wednesday. “Compliance will increase and the tax rate cuts will start showing impact by boosting consumption demand," he said.

The finance ministry also said that the Union and state governments have cleared tax refund dues of more than Rs54,000 crore to businesses in a fortnight long drive in the second half of July.