New Delhi: The Union cabinet signed off on completing the delimitation of all political constituencies, effectively redrawing India’s political map in time for the next general elections due in mid-2009.

“The ordinance will be issued within a matter of days, after the President’s approval, and then backed up with a Bill in Parliament," said information and broadcasting minister Priya Ranjan Dasmunsi. 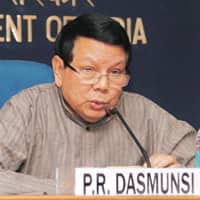 Constitutional obligation: A file photo of information and broadcasting minister Priya Ranjan Dasmunsi. An ordinance on delimitation of constituencies will be issued within a matter of days, he said on Thursday.

Delimitation is a constitutional obligation and must be conducted with every 10-year census of the population conducted by the government.

Karnataka, currently under President’s rule, will also have to go to vote based on a new voters list, while delimitation in Assam, Manipur, Nagaland, Arunachal Pradesh and Jharkhand, was put on hold until 2026.

A cabinet minister who didn’t want to be named said that several ministers raised Karnataka’s case in the meeting and agreed that President’s rule will probably have to be extended beyond the six-month deadline that expires on 28 May, to give the Election Commission (EC) time to revise the list of voters in the state based on the new constituencies.

“It will now be up to the EC to ask the government for permission to extend President’s rule in the state for a few months," the minister said. “We’ll do that, there should be no political opposition."

Some ministers at the meeting noted the present round of delimitation is based on the official population census of 1991, and not the latest census conducted in 2000.

The minister said this was because of a concern that delimitation will have reduced the overall number of assembly and Lok Sabha seats, even though it is clear the number of seats reserved for scheduled tribes will increase.

Though this is a potentially explosive issue, the minister said, it was decided that most of these matters are now outside political intervention. “We discussed the issues, and the Election Commission will resolve them while preparing the fresh list of voters," he said.

Other issues remain to be sorted out, particularly in states where by-elections have been held, but where legislators may find their constituency now being “wiped out" by delimitation. The matters were raised briefly at the cabinet meeting, though the discussions did not last very long, an official present there said.

“Other decisions (not related to the five states where delimitation is to be put on hold) will be now taken by the Election Commission," Congress spokesman Mohan Prakash said. “The main thing is that voters should get as much chance at just representation as possible."

Communist Party of India leader Gurudas Dasgupta said the EC should make sure that marginal and oppressed communities are properly represented.

“If, after delimitation, SCs and other communities for whom these seats are reserved, do not find adequate representation in Parliament, this will defeat the main purpose of the whole process," he said.