MGNREGS helped UPA come back to power in 2009mirroring that narrative now being woven around Ujjwala Yojana by senior BJP leaders, led by PM Narendra Modi himself

New Delhi: In the run-up to the 2019 Lok Sabha elections, the Narendra Modi government has been highlighting the success of the Pradhan Mantri Ujjwala Yojana, the scheme that provides free cooking gas connections to poor families.

Given its electoral potential —the scheme is said to have contributed to the Bharatiya Janata Party’s (BJP) victory in the Uttar Pradesh assembly elections in March 2017—Ujjwala is beginning to look a lot like the NDA’s Mahatma Gandhi National Rural Employment Guarantee Scheme (MGNREGS). 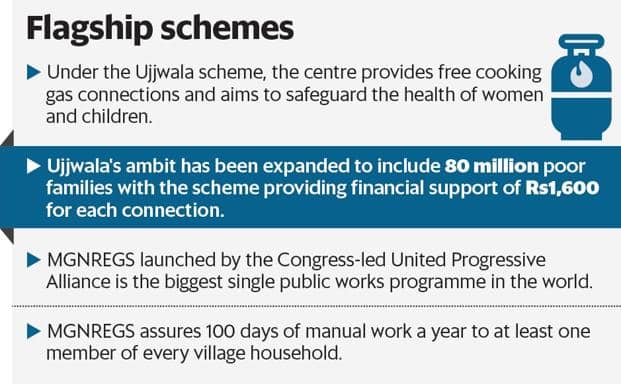 That was the government scheme that helped the rival United Progressive Alliance (UPA) come to power in 2009—mirroring the narrative now being woven around Ujjwala by senior BJP leaders, led by Prime Minister Narendra Modi himself.

MGNREGS, the rural employment guarantee scheme, is the biggest public works programme in the world that brought the Congress-led UPA tremendous electoral advantage. It assures 100 days of manual work a year to at least one member of every village household.

“The Ujjwala Yojana is a reflection of the intent of the government. NDA believes in development of all by taking everyone together on the path of development. The benefits of the scheme are without any bias of caste or religion and that was the electoral promise of Modi," said a senior BJP leader.

When the Mahatma Gandhi National Rural Employment Guarantee Act was notified on 7 September 2005, it initially covered the 200 poorest districts. But this was later expanded to cover all of India’s rural areas.

Ironically Modi had termed it a living example of the Congress’ mistakes.

“Ujjwala has been a success and that’s the reason the targets were increased. The implementation is so well-tuned that it is now on auto-mode," said a government official closely associated with monitoring the scheme, requesting anonymity.

Launched on 1 May 2016, the Ujjwala Yojana aims to safeguard the health of women and children. While the clean fuel protects them from the hazards of inhaling smoke, it also helps the poor avoid going to unsafe areas to collect firewood. The Ujjwala scheme provides financial support of Rs1,600 for each cooking gas connection to poor households.

“Most political parties, both national and regional, have talked about working for the upliftment of poor but the Ujjwala scheme of NDA is actually an effort to improve the lives of financially weaker sections. The appeal of the Prime Minister to give up (cooking gas) subsidy was also an attempt to make people realize that if they give up their subsidy on LPG, more needy people would benefit," the BJP leader added.

As part of its efforts to expand its social base before the 2019 Lok Sabha elections, the BJP leadership has also asked its public representatives to explain initiatives like the Ujjwala Yojana to Dalits and other socially backward communities.

Ujjwala has strengthened the lives of the poor, marginalized, Dalits and tribal communities, Modi said on Monday.

This comes in the backdrop of the country having witnessed protests by Dalits against the alleged dilution of the Scheduled Castes and the Scheduled Tribes (Prevention of Atrocities) Act. The issue holds importance for the BJP as it has been able to expand its electoral footprint to 21 states since 2014 by bringing within its fold backward castes, Dalits and scheduled tribes.

Comparing his government’s performance with that of its predecessors, Modi said that though liquefied petroleum gas (LPG) gas cylinders came to India soon after Independence (in 1955), only 130 million families had cooking gas connections in 2014. In the last four years, the NDA government has given 100 million LPG connections.

“Today, of every 100 families, 81 families have gas connection," Modi said.