Three charts that show why India lags in innovation

If the govt is serious about boosting innovation, it should invest in higher education instead of rolling back scholarships

Mumbai: India has no dearth of innovation initiatives, both in the government and the private sector. Yet, the country continues to lag other developing nations.

A recent survey called Contributors and Detractors: Ranking Countries’ Impact on Global Innovation, conducted by a US-based think tank, the Information Technology and Innovation Foundation (ITIF), ranks India near the bottom of a list of 56 countries.

While India’s intellectual property laws, export subsidies and balkanized market in services have contributed in large parts to its poor ranking, a close look at the sub-indices of the ITIF study reveals that the country’s poor performance in developing human capital has also not helped its rankings.

India is at the bottom of the list when it comes to average education expenditure per primary and secondary student (purchasing power parity, or PPP, dollars). India spends only $1,248 per student, and is behind countries such as Colombia and Vietnam (see Chart 1). Nor does India fare any better when it comes to higher education. Government funding of university research (per capita) is poor. India is ranked among the bottom six, behind countries including South Africa and Brazil. Poor investment in higher education means that India doesn’t do well in research outcomes. 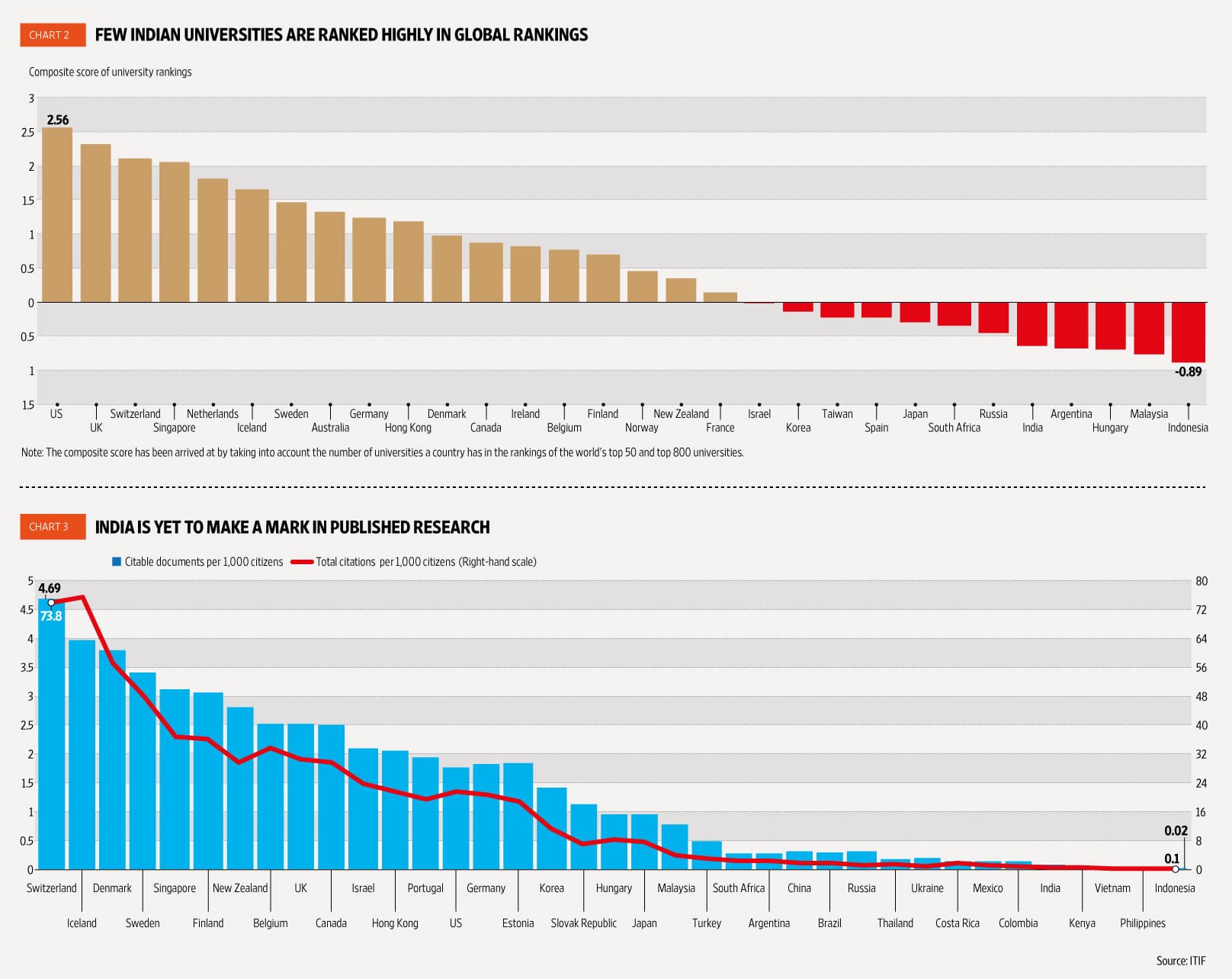 India’s universities may not have the best research facilities, but between the Indian Institute of Science, the Defence Research and Development Organisation and the Indian Space Research Organisation, the country does host some research organizations of repute. Nonetheless, India has a middling rank when it comes to government expenditure on research and development per capita. At $464, it is behind even Kenya and South Africa.

This translates to only 15 researchers per 100,000 people, putting India among the bottom five countries on this yardstick. Not only is the quantum of research poor, but also the quality of research.

India is among the bottom six countries when it comes to Citable Documents and Total Citations per 1,000 citizens (see Chart 3).

In addition to this, India does not have a technology transfer legislation that would enable the transfer of know-how from university research labs to the private sector for commercialization. Not only advanced economies but also developing countries such as South Africa, Indonesia and Brazil have legislation that enables licensing and transfer of economically significant innovations to commercial markets.

The ITIF report cites the example of the Bayh-Dole Act in the US which transfers ownership of an invention or discovery from the government agency that helped pay for it to the academic institution that carried out the actual research. Other advanced economies such as Germany also have legislation in place to foster close partnerships between industry and academia.

A study by the Biotechnology Industry Organization, which looked at the period 1996-2007, found that as a result of university licensing, 279,000 jobs were created, and gross industry output increased from $108.5 billion to $457.1 billion.

The study argues that there is a close correlation between domestic innovation capacity and contribution to global innovation. A country with policies to boost innovation also contributes globally to increasing innovation.

In this context, recent events to boost innovation, such as Start-up India, amount to not much more than political exercises aimed at creating a short-term boost. Pushing taxpayer money into start-ups will definitely go some way towards increasing employment in the short term. However, as Mint has reported earlier, this is not a very useful strategy when there is no shortage of international capital willing to invest in Indian start-ups.

If the government is serious about boosting innovation, it should invest in higher education, instead of rolling back scholarships.

Tadit Kundu contributed to this story.