‘We reinforce our stance on price stability’

“Every time I do a lot of things and so there is a lot to say. This time, I have not done anything." was Reserve Bank of India (RBI) governor Y.V. Reddy’s first comment when he started the customary post-monetary policy press conference at the Indian central bank’s headquarters on Mint Street in Mumbai. Reddy left the key policy rates —both repo or the rate at which RBI injects liquidity and reverse repo, the rate at which it absorbs liquidity—as well as banks’ cash reserve ratio or CRR, which determines the balance they need to keep with the central bank, unchanged.

Considerations regarding the domestic economy influenced RBI’s decision, but Reddy made it clear that the central bank was watchful of the “dramatic developments" globally and had anticipated and planned for the current situation of “heightened global uncertainties". The “situation is so complex that it will be inappropriate to jump to a conclusion as to what is happening there (US) and start moving in one direction and getting oneself locked in that direction," he said as a prelude to his interaction with the media.

He also said that RBI would “intensify monitoring of the global developments and act promptly as required". 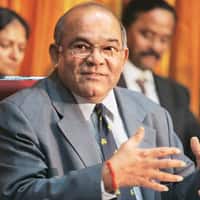 No change, yet: RBI governor Y.V. Reddy at a press conference in Mumbai on Tuesday.

We should look one year behind and one year in advance to judge the effects of growth. In January 2007, growth in India was very strong around 9%, but inflation was around 6% and that was the major issue. We had to concentrate on rebalancing the whole supply and demand factors. As a result, in January 2008, we have arrived at a growth of 8.5% and the inflation has been brought down to below 5%, which is what we wanted. What we want in 2009 is a growth rate of 8.5%, if not more, despite the heightened global uncertainties. We should go towards 4-4.5% inflation if we are looking at global integration.

In January 2007, the global growth was very strong and in January 2008, some countries are talking about a possible recession. In 2009, it is nobody’s bet that global growth will be higher. In fact, there are chances of a slowdown.

Global inflation was moderating in January 2007, but most policymakers missed out on the second order effects of oil prices and food prices, though we have constantly emphasized on it. Now, all central banking authorities are recognizing inflationary pressures. The global dilemma is that growth is likely to moderate; inflationary pressures have hardened; and financial markets in some countries are in a turmoil. These are the complexities in which we live in today.

In January 2007, there were strong capital inflows. In 2008, it has become stronger and in 2009, further capital inflows and outflows are expected and that is what we, as policymakers, need to keep in mind.

On growth and stability

As mentioned earlier, the growth is on expected lines and we had planned for it to “moderate"—though there are some concerns for some components in the industrial sector and we need some disaggregated analysis to follow this. Inflation is apparently comforting, but we have to see the underlying issues.

We recognize that there has been some suppression of inflation because the pass-through of the international oil prices has not occurred.

Secondly, all over the world, people look at consumer price inflation, which in India is around 6%. Then, there is a pretty strong overhang of liquidity and the aggregate demand pressures are evident. Therefore, inflation is not as comfortable as the numbers indicate and we cannot afford to let our vigil decline. We reinforce our stance on price stability. The stance on financial stability is also important in view of the global developments.

By and large, money, foreign exchange and government securities markets have not been so volatile in India compared with the global economies. Equity markets have seen excess volatility, but this kind of volatility has been noticed in other markets as well.

However, there has not been any significant spillover from the equity markets to other financial markets. Therefore, we do not feel there is any particular reason to make any changes in our earlier stance.

As regards bank balance sheets, while there is evidence of some improvement in credit quality, there is a huge amount of liquidity on their balance sheets, and their net interest margins are high compared with global standards. So, there is more need for the banks to look at their institutional and procedural constraints. There is much more scope for banks to extend credit to employment-intensive areas and we will give them the required support.

The capital inflows have been very large in the recent past and, given the current global uncertainties, we should be prepared for all possible scenarios, including capital outflows and volatilities. We carefully monitor global factors because of ‘simultaneity’ of global risks. There are simultaneous risks—inflation risks on account of oil and food, and more importantly, of injection of huge liquidity in the financial markets to take care of the markets in the short term.

So, there are inflation risks from three different sources. Then, there is also a possible risk of a slowdown. Besides, the largest financial intermediaries are facing difficulties because of their need for additional capital. The markets from where they could raise money have not reached a state of normalcy yet. These are the various risk factors that we need to keep in mind and prepare ourselves for.

International experience shows that while in some countries there may be some amount of relationship between capital flows and interest rate differential, but in theory, it is not that well established. In fact, India’s own experience is not that clear. So, there is no wisdom as to how to input interest rate differential into monetary policy decisions.

However, I will go back to my original proposition and state yet again that for us, domestic policy considerations dominate. Even while we make a reference to the US economy, it must be kept in mind that they are taking actions based on their domestic economy, which is only fair.

In India if there is no convergence of the problem, there cannot be a convergence of the solution. I am not saying that interest rate differential is not a problem, but it has to be viewed in the context of macro challenges. We should be prepared to move swiftly in whatever direction required.