Does crime pay in politics?

New Delhi: Almost one out of every five candidates that contested elections to Parliament or state assemblies in the past nine years (since 2004) have criminal cases against them, a study by a Delhi-based non-governmental organisation that works in the field of electoral reforms has shown, reflecting the extent of criminalization in politics.

To be sure, the study by the Association for Democratic Reforms (ADR) looks at charges and not convictions, and it is possible—as most political parties claim—that at least some of the cases filed against candidates are false and frivolous and motivated by political rivalry.

However, almost one in three members of the current Lok Sabha have criminal cases against them, almost the same proportion of members of current state assemblies that have cases against them—a number that, when seen in consonance with the one-in-five ratio mentioned above, indicates that there seem to be higher chances of a candidate with criminal charges against him or her being elected.

The study comes around a fortnight after the Supreme Court said members of Parliament and state assemblies should quit soon after being convicted of criminal charges. 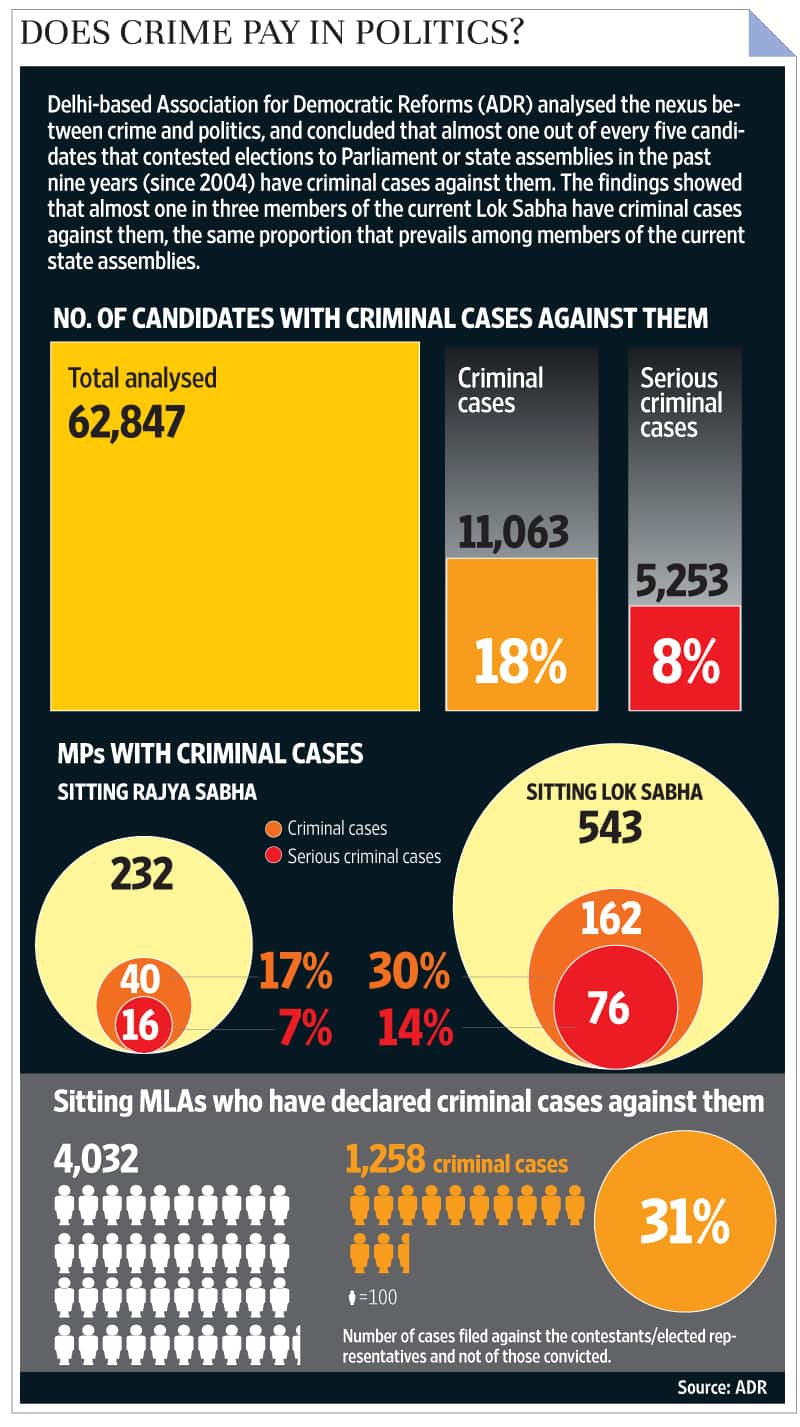 Eminent historian and columnist Ramachandra Guha said the results were cause for concern.

“It’s an extremely worrying phenomenon that those who have money and manpower get elected and political parties which have least of these are getting less number of seats. It shows a major institutional degeneration. However, there is a complacency and silence among top leaders about it. Neither (Gujarat chief minister and main opposition Bharatiya Janata Party’s political face) Narendra Modi nor (Congress vice president) Rahul Gandhi has ever spoken about it in their speeches."

Indeed, around one in four of the Congress candidates in the period covered by the study, and one in five of the Bharatiya Janata Party candidates, have criminal charges against them. One out of every five Congress members of Parliament and state assemblies in this period has criminal charges against them. The corresponding figure for the BJP is one in three. The proportion is lowest for the Communist Party of India (Marxist), at 9%—or around one in 10 successful candidates.

Those numbers clearly indicate that there isn’t much difference between the two main national parties.

The ADR study has come in the backdrop of the apex court taking a few initiatives to cleanse the political system. It also comes at a time when the United Progressive Alliance government has been buffeted by corruption scandals.

The study didn’t go into reasons for candidates with criminal charges being elected, said ADR co-founder Jagdeep Chhokar. In some cases, there may not have been an alternative, he explained. ADR sources its data from affidavits filed by contestants at the Election Commission during election time.

In the period covered by the study, the Shiv Sena had the highest number of elected representatives—three out of four—with declared criminal charges followed by two Bihar-based parties—the Rashtriya Janata Dal and the Janata Dal (United).