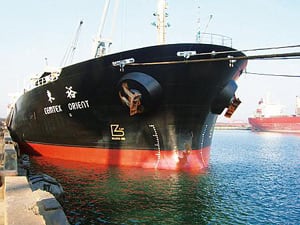 The Noble consortium and MPSEZ emerged the highest bidders for the respective berths when the price quotations submitted by shortlisted bidders were opened on 15 April, a port official said on condition of anonymity because the results have not been made public yet. An official spokesman declined comment. Paradip port plans to build a Rs479 crore terminal with a capacity to handle 10 million tonnes (mt) of coal a year and a Rs591 crore terminal capable of handling 10mt of iron ore a year.

The bidder willing to share the highest percentage of its annual operating gross revenues with the Union government-owned port will win the rights to develop and operate the berths for 30 years.

“We have become the highest bidder for the iron-ore terminal," said Kshitiz Bhasker, head, business development at Gammon Infrastructure Projects. The Noble consortium has agreed to share 36.80% of its annual operating gross revenues with the port.

An executive at the Adani Group said that MPSEZ, which runs India’s largest private port and a special economic zone at Mundra in Gujarat, had submitted the highest price quotation of 12% for the coal terminal. In the process, MPSEZ beat other contenders for the coal berth that include Essar and the Noble consortium.

The winners will be awarded the contracts after a new government is formed in New Delhi, said a shipping ministry official, who declined being named. India is holding a five-phase general election that began on Thursday. Poll results will be declared on 16 May.

These rates will be indexed to the Wholesale Price Index, a measure of inflation, to the extent of 60% every year, to account for rising prices.