India has a 'serious' hunger problem with 15.2% of its citizens undernourished and 38.7% of under-five children stunted, says a new report

New Delhi: Like most of its south Asian neighbours, India has a “serious" hunger problem with 15.2% of its citizens undernourished and 38.7% of under-five children stunted, said the Global Hunger Index report released by the Washington based International Food Policy Research Institute (IFPRI) on Tuesday.

Also, India’s global hunger index or GHI score of 28.5 is worse than the developing country average score of 21.3. While countries like Brazil and Argentina have a GHI score of less than 5 and ranked the best among developing nations, nations like Chad and Central African Republic fare the worst with a score of 44.3 and 46.1, respectively.

The global community is not on course to end hunger by the United Nations Sustainable Development Goal deadline of 2030, IFPRI said in a statement while releasing the report. 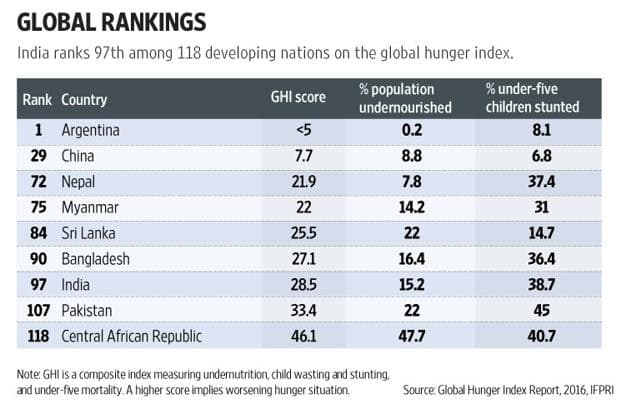 It added that if hunger declines at the same rate as it did since 1992, more than 45 countries, including India, Pakistan, Haiti, Yemen, and Afghanistan, will still have ‘moderate’ to ‘alarming’ hunger scores in the year 2030, far short of the goal to end hunger by that year.

However, the report highlighted some bright spots, like 20 countries, including Rwanda, Cambodia, and Myanmar, who reduced their GHI scores by over 50% each since 2000 (India’s GHI score fell by 25.4% during this period), and the fact that no developing country for which data was available was in the “extremely alarming" category.

The GHI score is a multidimensional index composed of four indicators—proportion of undernourished in the population, and prevalence of child mortality, child stunting, and child wasting.

On the severity scale, a GHI score of less than 10 means “low" prevalence of hunger while a score of more than 50 implies an “extremely alarming" situation.

“Countries must accelerate the pace at which they are reducing hunger," said IFPRI director-general Shenggen Fan, adding, “ending global hunger is certainly possible, but it’s up to all of us that we set the priorities right".